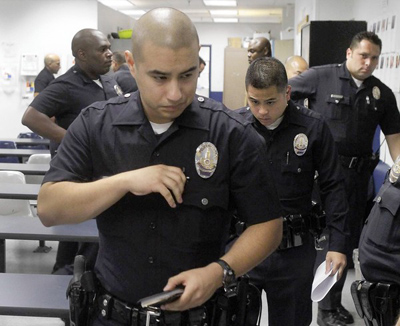 In a display of brinkmanship that could throw ongoing contract talks into turmoil, Los Angeles Police Chief Charlie Beck issued a public warning that the LAPD would have to send home thousands of police officers unless an agreement can be reached with union leaders to extend a deal on overtime benefits.

The staffing reductions, Beck and other police officials said, would force the department to shutter or dramatically reduce the size of some specialized units, forgo investigating lower-priority crimes and perhaps drop the number of officers working regular patrol shifts.

Officials from the Police Protective League, which represents rank-and-file officers, dismissed Beck's warning as a misguided ploy to pressure them into making concessions.

With the city facing its worst financial crisis in decades, the LAPD has not been paying officers overtime wages, except in rare situations, for the last year. In previous years, their contract entitled officers to receive payments once they accrued 96 hours of overtime. To bypass that requirement, police and union officials negotiated a deal in which the threshold for making payments was lifted and, in lieu of cash, officers were required to take time off when they banked about 250 hours of overtime. After sitting out several days, or in some cases weeks, to lower their overtime totals the officers return to work.

That agreement, however, expires at the end of the month, and unless city and union negotiators agree on a new contract or extend the overtime deal while talks continue, the department will revert back to the old overtime rules.

If that occurs, Beck said in a statement released late Wednesday night, he would have to force officers to take time off well before they reached the 96-hour limit, and the drain on manpower would seriously strain the department's ability to adequately staff police stations throughout the city. Department estimates show that more than 1,000 of the LAPD's nearly 10,000 officers would hit the overtime ceiling and be sent home in eight weeks or less, said Cmdr. Rick Jacobs, Beck's chief of staff. The average officer would meet the limit within about four months, which would leave command staff to juggle severely depleted rosters, Jacobs said.

To fill some of the inevitable staffing holes that would form, Beck said he was planning to reassign officers from the department's specialized units to regular patrol duties. He did not specify which of the LAPD's many specialized units, which include vice, gang, narcotics and several others, would be targeted. The reassignment plan being drawn up by police officials calls for about 200 officers to be sent back to patrol - a number that officials acknowledged would be insufficient to cover all the gaps that would arise as overtime totals mount.

The police officials, who asked that their names not be used because of the sensitivity of the ongoing contract talks, said it was too early to know exactly how the forced time-off of such a large number of officers would affect public safety. They speculated that after a few months there would be too few officers available to staff stations at current levels, while detectives would have to focus on serious crimes and leave lesser ones untouched.

"I am obligated to make plans for changes that I do not necessarily want to make. At this point, it is only my intention to prepare you for what lies ahead," Beck wrote. "It is not my desire to reassign officers out of their current assignments, but it is the only way the department can maintain the level of front-line resources that are essential for the protection of the public's safety."

The showdown over the overtime issue is unfolding against the backdrop of the ongoing contract negotiations. With a $41-million hole in the LAPD budget, city negotiators have been leaning heavily on the Police Protective League for concessions.

"With just 20 days to go before the new city budget takes effect, the LAPD is threatening to take measures to plug the gap that put the public at risk and show a total disregard for long-established collective bargaining principles," Weber said. "We are not going to sit by and allow our membership to be scapegoats for the failure of city leaders to adequately fund public safety in the budget process."

Weber dismissed the idea of extending the current overtime rules, saying it was a distraction from the larger issue of reaching an agreement on a new contract. "We have the ability to get a deal done in time, and that should be the focus. This talk of disruption to the department and moving personnel around is unnecessary."

A dispute is brewing as to whether Beck would have the authority to force officers to take time off if the old overtime rules went back into effect. Weber said the current contract makes clear that officers would have to be paid cash. Department officials disagreed, saying city attorneys had approved the move.

If they occur, the staffing shifts are certain to deal a blow to officer morale, as officers working in coveted specialized assignments will land back in regular patrol cars responding to radio calls. The plan also raises questions about the training and preparedness of the officers being reassigned. At least some of them are expected to be detectives and other non-uniformed officers who have not worked as regular patrol officers for years.