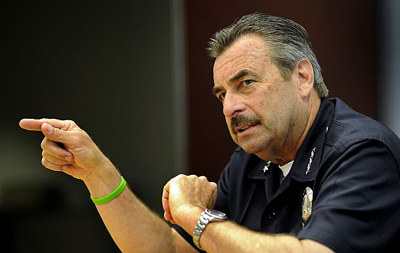 Police Chief Charlie Beck says the new car impound policy going into effect soon will help everyone because it will lead to the city having more responsible drivers. (Dean Musgrove/Staff Photographer)

Despite some opposition and questions about legality, a policy initiated by Los Angeles Police Chief Charlie Beck that allows some unlicensed drivers to avoid a 30-day impound of their cars is expected to roll out in three weeks.

Beck reiterated the terms of the policy during an editorial board meeting with the Daily News Monday, hoping to clarify what he said has been unfair criticism of the program, as well as questions surrounding his motivation to focus on car impounds.

Some groups have said the policy rewards illegal immigration, while others have suggested Beck is seeking favor with Los Angeles Mayor Antonio Villaraigosa and the Latino community, all of which he called untrue.

"The goal of this is to make this a safer city to drive in," Beck said. "I intend to have no other job after this. When I'm done being the chief of the Police Department, I'm done. Because of that, it's given me a unique position to do what I believe is right."

The policy would change the criteria by which an unlicensed diver could avoid a 30-day impound.

A motorist who is pulled over by an LAPD officer for a driving violation must have a valid identification card, which can include an employment or military ID, or a matricula consular card. The motorist also must not have caused an accident, have no prior misdemeanors, and have proof of car insurance.

The driver is still cited for the violation, and his or her car is impounded because there is no driver's license. But if all four criteria are found, the driver's car would be released immediately to a licensed driver - a cost of $268.55 that includes towing charges, compared to about $1,400 for the 30 days.

Beck's decision to change the policy was spurred by an inspector general's report released two years ago that showed an inconsistency in impound laws. A majority of the vehicles were impounded for 30 days, while the rest were released immediately.

He has called the mandatory 30-day impounds unfair to illegal immigrants, who are not allowed to apply for drivers licenses, a state law that has been in place for nearly 20 years. That's why Beck wants the state to repeal that law and allow the undocumented to have provisional driver's licenses.

But he also said the new criteria could force unlicensed drivers to be more responsible on the road. At least 250,000 people in the City of Los Angeles are undocumented and driving without a license, he said.

While the Police Protection league opposes the change, the Police Commission approved the policy last month in a 4-1 vote, with Commissioner Alan Skobin, dissenting, saying it encourages unsafe driving. The City Council did not challenge the vote.

Beck admitted, however, he did not know how unlicensed drivers would obtain insurance, a criteria in California along with a driver's license.

"It's not something we know first hand, but we have just have heard of smaller agencies doing this," he said. "The law is very specific in California. You have to have a driver's license and you have to be insured. Having the license is paramount. It shows you understand the laws of the driving."

Beck said the new policies will continue to be studied to see if it's working.