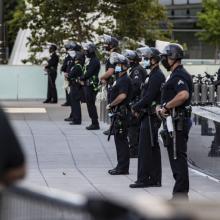 Coronavirus infections among Los Angeles police officers spiked in recent weeks, reflecting a broader increase in cases regionally and raising fresh questions about the role of protests in the spread.

Police officials have said that officers were exposed on skirmish lines as they worked to disperse screaming crowds. Protesters say officers recklessly arrested people en masse without wearing masks, exposing not just themselves but others.

In the last week, positive cases within the LAPD workforce jumped from 170 to 206, Chief Michel Moore told the civilian Police Commission on Tuesday.

“This was a 21% increase and is about twice the rate of our historic rate of change over the history of the pandemic,” he said.

Moore said the bulk of the LAPD employees who tested positive were sworn officers, though dozens were civilian employees. Three have been hospitalized with COVID-19, while many have recovered and returned to work.

After the commission meeting, Moore said he attributed the increase in part “to the challenging conditions officers faced” during the recent protests and demonstrations.

Tens of thousands of people have marched in recent weeks in Los Angeles and in other cities across the country and world to protest police killings of Black men and women, including George Floyd in Minneapolis and Breonna Taylor in Louisville, Ky. For days on end in late May and early this month, police officers squared off with protesters on skirmish lines, screaming orders and using force to disperse crowds.

“Officers in many instances attempted to wear face coverings but were challenged in effectively communicating with each other or over the radio, given the conditions,” Moore said.

Protesters and their supporters, meanwhile, have lambasted the LAPD and individual officers for weeks for not wearing masks during the protests, which they said put them at risk. Multiple lawsuits over the LAPD’s protest response cite the lack of masks on officers and the crowding of arrested protesters into packed buses during a pandemic as examples of the department’s unjust response.

During a public comment portion of the Police Commission’s online meeting Tuesday, multiple callers ripped into Moore over the issue, saying he should not be surprised that officers had contracted the virus, given that many of them had dismissed public safety concerns and refused to wear masks amid the protest crackdowns.

The incubation period for the coronavirus can last as long as two weeks, meaning infections caught in the last week may have originated as protests raged across the region.

L.A. County Public Health Director Barbara Ferrer recently said it is “highly likely” that the recent overall increase in positive cases is related in part to the mass protests.

Ferrer also suggested that an increase in social gatherings and the opening of more businesses after weeks of stay-at-home and closure orders has likely played a role. Moore also cited such factors.

Multiple protesters who were arrested or otherwise interacted with police during the protests said officers laughed at them or dismissed their concerns when they asked why the officers weren’t wearing masks.

Kamila Baran, 24, of Studio City, was arrested downtown the evening of June 1, with a friend and hundreds of others, over curfew violations, during what she described as a peaceful protest.

Throughout the process, most protesters had masks on, but none of the police officers did, Baran said. It was a point of contention, she said.

“One girl actually asked, ‘Why are none of you wearing masks? You’re putting all of us at risk.’ And one officer was like, ‘Well, we don’t believe that masks will help anyone,’” Baran said. “This girl was basically fighting this officer, saying, like, ‘What about facts and statistics and science?’ And one of the officers was like, ‘Well, it makes it harder for us to do our job.’”

Moore said officers were instructed to wear masks whenever possible, and many did so under face shields attached to riot helmets. Moore also said the department has increased cleaning of work areas and pushed for hand washing and the regular use of gloves.

In all, the LAPD has administered 1,900 tests on employees. Positive results have increased, too; the positivity rate rose to 11.7% in the last two weeks, Moore said, mirroring an increase across L.A. County. The county’s positivity rate has spiked from 5.8% two weeks ago to 8.4% this week.