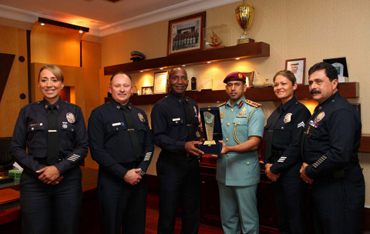 Colonel Al Shamesi presenting a commemorative shield to Head of the US delegation. (Photo - ME NewsWire)

The US police delegation headed by Major General Horace Frank, Deputy Commander of Special Operations and Anti-terrorism Bureau at Los Angeles Police Department (LAPD), concluded its official visit to the UAE as a part of the international expertise exchange program and participation in field operations.

Major General Frank expressed his satisfaction with the development he witnessed in all areas of police work, the utilization of sophisticated training plans, and with the Police Leadership's commitment to keep abreast of the latest developments and technology. He also praised the role and efficiency of police staff members.

Colonel Khaled Saeed Al Shamesi, Head of Security Support Department, stressed the importance of exchanging expertise and knowledge between prestigious institutions that are known for their provision of world-class services. "The visits and joint participation for both parties in the field of security support patrols aim to enhance the skills of the police and to acquaint them with the various techniques of crime fighting," he said, noting the unlimited support provided by the Police Leadership.

The US delegation visited the Weapons and Explosives Department, the K9 Security Inspection Department at the Directorate General of the Security and Ports Affairs at Abu Dhabi Police, the Mussafah Police Station, and the Sheikh Zayed Grand Mosque in Abu Dhabi for a cultural excursion to learn of Islamic culture.

It is worth mentioning that as a part of the international expertise exchange program, the Security Support delegation at Abu Dhabi Police had visited numerous police departments in developed countries, including the Los Angeles Police Department.

The ADP Security Support delegation consistently proves the efficiency and skillset of its male and female personnel, which qualify them to conduct their policing duties in various locations and conditions. The staff members are equipped with modern devices and weapons, and supported by field patrols that are designed and equipped according to the latest international standards.