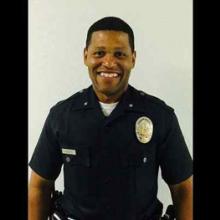 The news that Deputy Chief William Scott, a 27-year veteran of the police force, was chosen as the San Francisco police chief was viewed Tuesday as a loss for Los Angeles by his admirers, who include colleagues and even a critic of the department.

Green described Scott's style as "very collaborative, very measured" and credited him as "very much somebody that's brought accountability to the organization (LAPD)."

Green also hailed the selection, saying Scott will be a "good change-agent" for San Francisco. The Bay Area city has been hit with criticism over fatal police shootings of unarmed minorities and was under review by the U.S. Department of Justice.

San Francisco's acting Police Chief Toney Chaplin was seen as a front-runner, and the choice of Scott, an outsider to the department, was unexpected.

During an exchange about the new position, Scott seemed "excited about the challenge" of going to the San Francisco department as an outsider, according to Green.

"The fact that he's so collaborative will help" him make inroads with officers there, Green said.

During a news conference in San Francisco with the city's mayor, Ed Lee, to announce his acceptance of the job, Scott acknowledged that having an outsider lead a department can be "a shock to the system," but he has seen it done successfully at the LAPD by those who "really come in with new ideas and fresh ideas and work with the talent inside the department."

Scott said he "rose through the ranks" during William Bratton's tenure. The former Los Angeles police chief who came to the city from New York "was a great role model," he said.

Scott added that he had not been searching for a new job and "was very happy at (the) LAPD," but he seized on the opportunity because San Francisco was "always the place I wanted to live."

Scott is one of the "few members of the department who has both the respect of the community and officers," Cannick said.

Scott achieved this because he "looked at every situation as what it was," she said. He would go after criminals who needed to be caught, but when there was an "opportunity for this department to be more human and empathetic, he would allow, at least in the South Bureau, for that to happen," Cannick said.

Scott is a "strong advocate" for community policing methods and demonstrated this in the wake of "high-profile police shootings" by being as "transparent" as possible with residents and being "front and center, attending community meetings and speaking with the community," she said.

Jerretta Sandoz, vice president of the Los Angeles Police Protective League, previously worked under Scott when he was a lieutenant in the internal affairs division.

"I've found Chief Scott to be an honest and humble leader who has supported the rank-and-file police officers under his command," she said. "He has always approached police work with passion and integrity, and he will be missed."

Beck echoed the local sentiment about Scott's pending departure, saying in a statement that the "Bay Area's gain is L.A.'s loss." He pointed to Scott's role in "the successes we had stemming the surge of violent crime."

According to a statement from the LAPD, when Scott leaves for the San Francisco department early next year, he will be part of a line of former LAPD veterans who have gone on to lead law enforcement agencies, such as Los Angeles County Sheriff Jim McDonnell, Detroit Chief James Craig, Hermosa Beach Chief Sharon Papa, Greenbay Chief Andrew Smith and South Pasadena Chief Arthur J. Miller.

Scott has worked with the mayor's office on gang prevention and youth outreach measures, and embraced the Community Safety Partnership initiative, in which the Police Department cultivated relationships with residents at city-run public housing projects such as Jordan Downs and Nickerson Gardens, according to Mayor Eric Garcetti.

"The LAPD is a better department because of Bill Scott," Garcetti said in a statement.

"His departure is a tremendous loss for L.A., but I know the people of San Francisco are in excellent hands with the integrity, intelligence and warmth that Chief Scott will bring to his new role," he said.

Scott, who came to Los Angeles from Alabama, joined the Los Angeles Police Department in 1989 and has held posts in the West Bureau, Internal Affairs and Professional Standards Bureau. He was promoted to the commander rank in 2012.