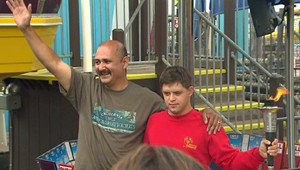 Martinez, who admits he's not fond of heights, took on the challenge to raise money and awareness for the Special Olympics of Southern California.

His son, Jason, has Down syndrome and has won more than 30 gold medals in Special Olympics swimming competitions.

Jason joined his father periodically in the Ferris wheel gondola, and was by his side when he officially broke the record.

During his 25-hour ride, Martinez wasn't allowed to sleep, and he only got a five-minute bathroom break each hour.

Martinez said his long shifts as a detective with the LAPD helped prepare him for the challenge.

Park officials made several accommodations to give Martinez a more comfortable ride.

They installed special seating with additional padding, and attached a solar panel so that he had electricity to power his flat-screen TV, iPad and cellphone.

The public was invited to ride the Ferris wheel for $5 during Pacific Park's exclusive after-hours on Thursday from 8 p.m. to midnight.

All the proceeds are going to the Special Olympics of Southern California.

Donations can also be made at www.pacpark.com/worldrecord.

All donors will receive a $10 off coupon Sports Authority.

Donors can also guess how many rotations the Ferris wheel made its during the 25-hour ride.

The person who gets the closest without going over will get a one-hour private ride with four guests, as well as dinner from The Lobster restaurant.