Skip to main content
20
Apr 2020
LAPD detective who was critically ill with COVID-19 is released from hospital to cheers from medical staff, police 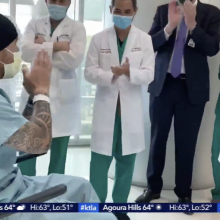 A Los Angeles Police Department detective who was hospitalized in extremely critical condition with the novel coronavirus was discharged Friday and greeted by loud cheers from hospital staff.

Dozens of people — including family members, hospital staff, and police personnel — were on hand to applaud him as he was escorted out in a wheelchair, video from the scene showed. He was clad in blue scrubs and his face was covered with a mask as he left the facility.

The detective hugged his sons and kissed his wife for the time since he was diagnosed with COVID-19 about a month ago.

Uniformed LAPD officers also showed up in full force to salute and thank the doctors, nurse and staff at Saint John’s hospital.

Among those on hand was LAPD Chief Michel Moore.

“On behalf of 13,000 of your family members that are so glad to see you coming out of this hospital so much better than how you came in,” he told Chang in front of the dozens who gathered during the celebratory sendoff.

Chang, 52, was critically ill on April 7 when he was transferred by ambulance from an Orange County hospital to Saint John’s to receive a “higher level of treatment,” the release read.

Looking back, he remembers his condition deteriorating rapidly, being put on a ventilator and hearing talk of participating in a medical trial.

And although there are gaps in his memory, Chang knows which part was the most difficult.

“The hardest part of the thing was … you never know if that’s the last time you’re going to see your loved one. It’s — you’re on your own,” he said.

After being admitted to intensive care, Chang underwent an Extracorporeal Membrane Oxygenation procedure, a highly specialized treatment that allows physicians to attach an external device that pumps blood outside the body, hospital officials said.

That gave his heart and lungs a chance to “rest and heal” while he received critical, 24/7 care from the ICU’s nurses and care team, according to the release.

Meanwhile, the detective was also enrolled in a clinical trial where he was prescribed Sarilumab. The drug is “an IL-6 antagonist that inhibits the deadly inflammatory response of the virus in the lungs and other vital organs,” the release stated.

Chang’s condition steadily improved each day as he responded to the therapy. He was well enough that nurses Face Timed his family as they celebrated his birthday last week.

And on Friday, he got to go home.

Although he has been released from the hospital, Chang still needs oxygen and will have a process of being rehabilitated before he can return to normal life and work, according to one doctor.

“But I have to tell you, this guys is so heroic, he is such a fighter and such a warrior that I have no doubt that he will be back to his life as soon as possible,” she said.