Skip to main content
06
May 2020
LAPD employee assaulted with a rock while jogging, agency says 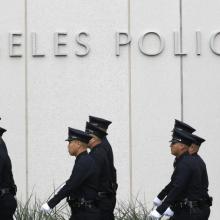 A Los Angeles Police Department employee was attacked while jogging Tuesday morning and struck in the head with a rock, a department spokesman said.

The employee was running near the LAPD Academy in Elysian Park about 9:30 a.m. when an assailant — identified by police as Danny Ramirez, 28, of Los Angeles — armed himself with a rock, hit the employee in the head and ran off with some personal property, Officer Mike Lopez said.

Ramirez was arrested Tuesday on suspicion of robbery, Lopez said.

He declined to specify the LAPD employee’s rank or what property was stolen. The employee suffered a head injury but is in stable condition, Lopez said.