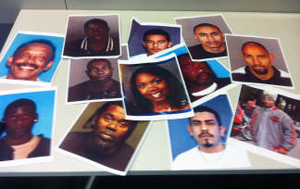 LAPD officials and federal authorities credit the second phase of the summer-long "Operation Save Our Streets" in helping to solve 50 homicide cases in South L.A. Some of the victims are displayed in these photos. (Corey Moore/KPCC)

Los Angeles Police announced the results of a joint operation with the FBI to crack unsolved murder cases on Tuesday.

Police Chief Charlie Beck said the results of the summer-long program called "Operation Save Our Streets" was "remarkable." Fifty homicide cases were solved during a three-month period, he said, and police made 110 felony arrests.

Other successes included 75 search warrants and contacts FBI agents and detectives made with over 500 witnesses, suspects and community members.

Authorities said South L.A. leads the city in the number of homicide cases, and over 1,000 of them have gone unsolved for decades - most of them gang-related. The federal government provided almost half a million dollars for the joint operation, but haven't yet earmarked money for a third year.

Southland authorities say they may get word about an allocation within the next week. Beck said funding remains an issue for his department, "It is a sad but true statement to say that our ability to solve crime is often hampered by lack of funds," he said. "So when we can get federal funds and we can get federal support, we can make a lot of progress as has been evidenced by this task force."