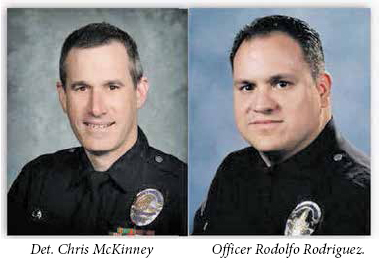 On May 15, 2007, a crazed transient armed with a sword entered the grounds of a Korean church and school located off the 210 freeway in Foothill area. The suspect attacked the churchgoers at the school, but before the victims and staff could flee, the transient sliced the arm of a staff member and started 11 fires throughout the grounds.

Foothill officers responded within minutes and chased the suspect, who was now armed with a dagger in addition to the sword. The officers stopped their pursuit once the suspect fled into a large drainage tunnel and called for assistance. Metro K9 units responded to the location and searched the nearby hillside and large storm drain, but were unsuccessful in locating the suspect.

Unbeknownst to the officers, the suspect had stabbed an innocent victim at a nearby 7-Eleven market weeks earlier. The following day, Detective Chris McKinney and Officer Rodolfo Rodriguez, who were assigned to Foothill Narcotics, returned to the location to search for the suspect. As they searched near the 210 Freeway, they examined the bridge that stretched across a dry riverbed near the church. They located a small access panel under the bridge and found a confined space, large enough for someone to walk in. Using their flashlights, they illuminated the interior of the tunnel and noticed discarded trash inside as if it had been recently occupied. 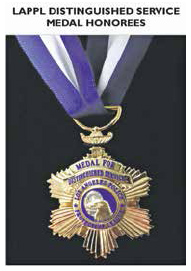 Upon entering, they discovered they could walk the length of the dark tunnel, which was divided into three sections. In order to enter into each section of the bridge, they had to crawl through a smaller 2 feet by 2 feet by 4 feet tunnel. Approximately 285 feet into the tunnel they approached the last section and had to enter into a 2 feet by 2 feet by 10 feet tunnel, at which time they noticed a blanket hanging over the opening. As Detective McKinney, on his hands and knees, moved the blanket to one side the suspect swung a 17-inch machete down to within inches of his face, narrowly missing him.

McKinney immediately rolled onto his back and braced for a second attack. Fearing for his life, McKinney fired one shot, which struck the suspect and stopped the threat. Detective McKinney and Officer Rodriguez are commended for their initiative, investigative skills, bravery and tactics during this violent confrontation with an armed and dangerous suspect. Their willingness to go above and beyond the normal demands of duty demonstrate a commitment to service and are in the highest traditions of the Los Angeles Police Department.