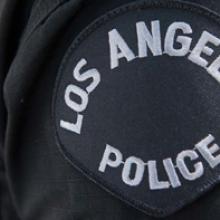 Los Angeles police officers who died in the line of duty were recognized Thursday in the memorial service held annually at police headquarters.

Police Chief Charlie Beck said he thinks daily of the officers killed during his time with the department, and feels "hugely mixed emotions" as he faces family members and police officers gathered for Thursday's service honoring the 207 officers killed in the line of duty during the 147-plus years of the Los Angeles Police Department's history.

"Today, I think about the mourning that we've all been through and the pain, but I'm also immensely proud of the heroism, the leadership and the sacrifice of the men and women we honor today," he said.

Each of the officers remembered Thursday "has a story," Mayor Eric Garcetti said.

"They have wives and husbands, children and parents, they have neighbors, they have colleagues," he said.

The ceremony began inside LAPD headquarter's auditorium. During a roll call of fallen officers through the years, surviving family members rose as the pictures and names of their loved ones flashed on-screen.

The attendees then moved outdoors to a memorial wall engraved with the names of each of the 207 fallen officers for a ceremony featuring a wreath-laying, rifle volley salute, helicopter flyover, the playing of "Taps" and a performance of "Amazing Grace" by bagpipers.

Family members were given roses to place near the name plates of their fallen loved ones on the memorial wall.

No officers were killed in the line of duty in 2015. Thursday's service recalled three officers killed 25 years ago in 1991.

Tina Kerbrat was just 10 months into her career as a LAPD officer in February of 1991 when she was killed amid "a notable spate of violence against police officers" that year, according to Los Angeles Police Museum Executive Director Glynn Martin, who is a retired LAPD sergeant.

Kerbrat and her training officer were on patrol when they spotted two men drinking beer. When they approached in their police car, one of the men revealed a gun and shot at the two officers. Kerbrat was wounded and died at a hospital on Feb. 11, 1991.

Krebrat, the first female LAPD officer to die in the line of duty, left behind a husband and two children, a boy and a girl.

They sought a safe place to land and managed to avoid crashing into the yard of Normandy Avenue Elementary School. The two officers were killed when their helicopter slammed into a parking lot near Vernon and Raymond avenues.

Champe had been with the LAPD for 17 years and left behind a wife, while Howe was with the department 20 years and had a wife and three children when they he and Champe were killed on June 13, 1991.