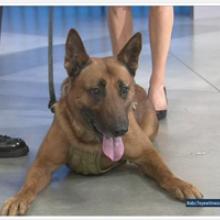 On New Year's Day 2016, LAPD K-9 Edo helped save the lives of officers and children from an armed man. (KABC)
ABC7

On New Year's Day 2016, Los Angeles Police Department K-9 Edo helped save the lives of officers and children from an armed man.

One of two men wanted for robbery and murder was running away from LAPD officers when he stole a car and crashed it into a house. When he ran into the home, a father and his three sons were inside. The man stabbed the father in the face and attempted to shoot the children when his gun jammed.

When Officer Huynh and K-9 Edo arrived at the house, the man started shooting at them as they tried to enter the house. As Edo engaged the man, the man shot himself in the head. Edo then pulled the man away from the gun.

Edo's courageous actions saved the lives of the K-9 team and the father and sons.

The American Hero Dog of the Year Award is the most prestigious honor that a canine can receive. Eight category finalists will be chosen based on votes and will compete in the final round for the title.

People can vote for Edo once a day until 12 p.m. on Wednesday at herodogawards.org/vote.

The sixth annual Hero Dog Awards will air nationwide as a two-hour special on the Hallmark Channel this fall.