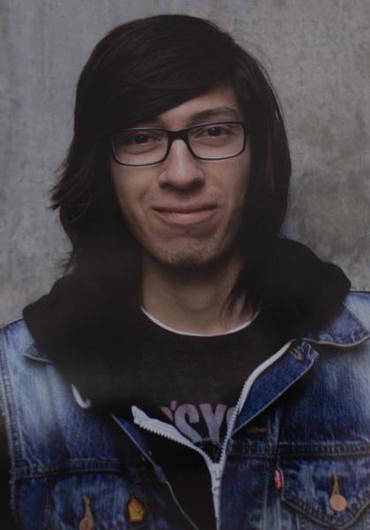 Julio Reyes-Salvador, 23, was an uninvolved bystander when he was killed during an LAPD pursuit in 2013. (Reyes-Salvador family)

Stopped at a red light in El Sereno, Julio Reyes-Salvador was oblivious to the cars hurtling toward him.

In front was a gray Chevrolet Tahoe, racing at speeds of more than 80 mph as a Los Angeles Police Department cruiser gave chase.

The pursuit, which began when officers tried to stop the fleeing motorist for reckless driving, ended when the Tahoe smashed into Reyes-Salvador's car, setting off a chain-reaction crash that crushed his Toyota Corolla. His car "looked like a soda can somebody just stepped on," one of the pursuing officers later recalled in court.

Reyes-Salvador, 23, was killed instantly. A friend in the passenger seat was seriously injured.

The crash was a stark illustration of the dangers of police pursuits in Los Angeles, where chases have long been part of cop lore and a staple of live local television news broadcasts.

A Los Angeles Times analysis of statewide data shows that LAPD pursuits injure bystanders at more than twice the rate of police chases in the rest of California. From 2006 to 2014, 334 bystanders were injured - one for every 10 LAPD pursuits, according to The Times' review of pursuit data reported to the California Highway Patrol.

Although fatalities remain rare, the analysis shows that LAPD pursuits are also more likely than chases in the rest of the state to result in a bystander's death. Reyes-Salvador was one of nine people since 2006 to be killed in LAPD pursuits in which they were otherwise uninvolved.

LAPD officials say officers take measures to keep the public safe during chases and that many of the injuries are minor. Much of the blame, they argue, falls on the city's sprawling web of multi-lane thoroughfares and highways, which they say allow suspects to move at greater speeds and make wild turns through traffic, greatly increasing the likelihood that someone may be hurt.

But experts who study police pursuits say the LAPD needs to do more to minimize dangers to bystanders. Unlike other departments, they say, the LAPD increases the risk of those injuries by allowing officers to chase motorists suspected of relatively minor offenses, including intoxicated or reckless driving, who are more likely to drive faster and erratically while trying to escape police.

Reyes-Salvador's mother blames her son's death in the 2013 crash on the fleeing suspect but said police share some responsibility for engaging in the pursuit.

The LAPD's injury and death figures stand out in a state that routinely leads the nation in pursuit-related fatalities, according to data tracked by the National Highway Traffic Safety Administration. 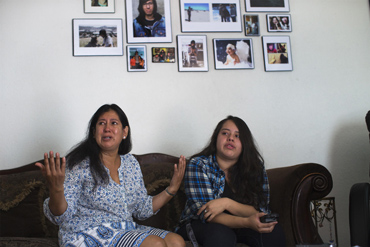 California authorities have tried in the past to reduce the problem, most notably in 2005, when the state Legislature stiffened sentences for fleeing from police, increased pursuit training for officers and required police agencies to report all pursuit data to the CHP.

The move followed a 2002 police pursuit that killed a 15-year-old girl in Chico.

Kristie Priano was riding in a minivan with her family when a sport utility vehicle slammed into the side of their van. The SUV's driver, a teenage girl, was fleeing police after taking her mother's vehicle without permission. Police were criticized for pursuing the suspect even though they knew where she lived.

"I always thought 'Only the bad guy gets hurt,'" said Kristie's mother, Candy Priano, who founded Pursuit Safety, a national nonprofit organization, after her daughter's death to push for reforms that would reduce bystander injuries and deaths in chases. "Before it happened to me, I never even worried about it."

The legislation appeared to have an almost immediate effect. The number of pursuits throughout the state fell sharply in the following years, according to CHP statistics. So did the number of bystanders hurt, dropping from 376 injuries statewide in 2005 to 172 in 2010.

But since then, injuries to uninvolved people have risen steadily, climbing to 260 across the state last year.

After years of slight declines, the number of injuries to bystanders in LAPD pursuits jumped up to 46 in 2013 before dipping last year to 29. Injury rates at the LAPD surpass those in other large California cities, including San Diego, San Francisco, Oakland, San Jose and Long Beach.

LAPD officials said about three-quarters of the injuries involve complaints of pain without visible injuries and that officers take precautions to improve bystander safety during chases. Officers will often slow down, they said, and let a helicopter monitor the pursuit when a suspect is moving at high speeds through a densely populated area.

Although they consider any injuries to bystanders unacceptable, LAPD officials said they have to balance the risks of engaging in a pursuit with allowing the possibility of a reckless driver causing a fatal pileup or a dangerous suspect committing a serious crime.

The LAPD allows officers to chase motorists suspected of felonies or misdemeanors. The city's policy is more permissive than those of many other large police departments in California, including those in San Francisco, San Jose and Long Beach, which limit chases to drivers who present an immediate danger to the public or are suspected of violent felonies. 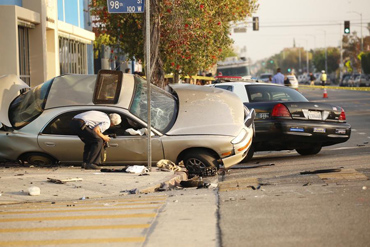 A team of investigators surveys the scene of the crash that killed Julio Reyes-Salvador. (Al Seib / Los Angeles Times)

LAPD Cmdr. Andrew Smith, the department's chief spokesman, said the kinds of misdemeanors L.A. officers can pursue suspects for, such as brandishing a firearm, could evolve into serious felonies. An uninvolved person could be injured in that pursuit, but Smith said the suspect could just as easily shoot someone if left unbothered by police.

Chases, they said, are only worth the risk when a fleeing suspect is known to be violent or poses an immediate risk to the public. Policies as permissive as the LAPD's, they say, are an invitation to more injuries.

Peter Bibring, director of police practices for the American Civil Liberties Union in Southern California, dismissed the department's argument that Los Angeles' geography might increase the number of bystander injuries. Oakland, San Jose and San Francisco all have similar urban landscapes, Bibring said, yet their injury rates are lower than the LAPD's.

"The LAPD's policy results in more bystander injuries. They may be catching people at a higher rate, but this is something that residents of Los Angeles should decide," he said. "Do they want their police department to chase more aggressively?"

Of particular concern to some policing experts was the LAPD's frequent pursuit of motorists suspected of reckless and drunk driving. Reckless drivers were suspects in 12% of LAPD chases from 2006 to 2014, more than double the state average of 5%, the Times analysis found. Suspected drunken drivers were the target of 13% of LAPD chases compared to 5% statewide.

"You're making the likelihood of a crash higher," said Geoff Alpert, a professor at the University of South Carolina who authored a report for the National Institute of Justice on pursuits. "The fleeing suspect's eyes are glued to the rear-view mirror. He's not driving well, and you're going to make him go faster. It doesn't make any sense."

LAPD officials said the department began a review of its pursuit policy last year that is ongoing. The department wouldn't comment on which specific policy changes might improve public safety, but Ferry insisted that bystander safety is a critical factor in any pursuit-related decision.

Department officials said officers know chases are dangerous and that they, too, could end up injured. 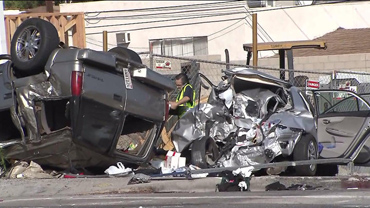 The driver of a Chevrolet Tahoe, left, who was pursued by LAPD smashed into Julio Reyes-Salvador's Toyota Corolla. Reyes-Salvador was killed instantly. (KTLA)

"Our officers that go in pursuit are putting themselves at risk," Ferry said. "Not that they want to do it, but we believe that is what the public wants."

In the El Sereno crash that killed Reyes-Salvador, the fleeing driver jumped from his vehicle after the collision and took off on foot. LAPD officers caught him a few blocks away and recovered a handgun from the wreck of the driver's car, court records show.

Jose Arrellano, 22, pleaded no contest to evading police while causing a death, weapons offenses and hit-and-run. He was sentenced to more than 27 years in prison.

Standing in her late son's bedroom, Yolanda Salvador wore a sad smile as she recently looked through a series of framed pictures taken by Julio, who hoped to become a professional photographer. He was studying photography at East Los Angeles College and was driving to Pasadena to take pictures for a college homework assignment on the day of the fatal wreck.

The walls of his bedroom-turned-memorial are now lined with some of his best work.

His mother said she understands why police need to pursue suspected criminals but thinks officers should also consider the long-term damage that a chase can cause when a bystander is injured or killed.

"Getting one bad person can sometimes cause the death of a good person and not only their death, but it changes a whole family," she said, sometimes sobbing. "It destroys one life. It destroys a whole other group of people's lives."