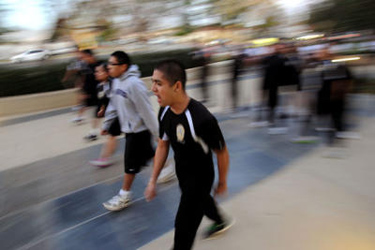 Joshua Garcia got started on his law enforcement career long before he was old enough to join the police academy - or even drive a car.

The 18-year-old had dreamed of being a cop since he was 8. So at 14 - as soon as he was old enough - he joined the LAPD's Cadets program, which involves youth in community service, crime suppression, leadership classes and physical training.

And the Canoga Park teen has stayed with the youth outreach program ever since, rising through the ranks to become a Cadet commander and working with other teens at LAPD's West Valley station.

"Just the thought that I became somewhat of a well-rounded person, and teach others to be a better person as well, that's what made me stay in the program," Garcia said. "It creates better people."

As the LAPD continues its push for community-based policing, it now has for the first time lowered its age requirement for cadets, who are based at 23 divisions across the city.

The program is now looking to recruit 13- to 20-year-olds for its new academy class, which begins Jan. 28. The minimum age used to be 14.

The deadline for applications is Jan. 25. Recruits will need to go through a once-a-week academy class for 18 weeks. There, they'll take public speaking classes and get a closer look at police work, such as traffic stops, Internet crimes, drug awareness and K9 units and the bomb squad.

"Once you get through it, it's a lot of fun," said Michael E. Downs, a 16-year-old cadet from Northridge. "And even if you don't want to be an officer, it just helps with leadership ... (and) it shows that if you put your mind to something, you can go through the whole entire thing."

The program offers a taste for youngsters interested in law enforcement before they hit 20 , the minimum age to join the official LAPD Police Academy.

Once they graduate from the Cadet academy, they can volunteer at local police stations and public events or help pass out fliers to alert residents to crime trends.

"We've become a life-skills program," said Officer Gail Muzzey of the West Valley division. "We teach them how to get up and do public speaking. We do discipline, the marching, community service stuff, all of the above.

"We also reward the kids, too."

The group has taken trips to Knott's Berry Farm, Six Flags Magic Mountain, river rafting and mountain biking, allowing cadets to make fast friends with others in the program from across the city.

"It's things that we wouldn't have done as a regular civilian," Garcia said. "It's a once-in-a-lifetime opportunity.