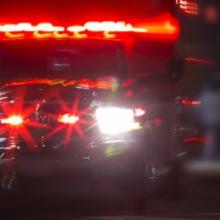 An ambulance rushes to the scene of an accident in a file image (Credit: iStock / Getty Images Plus)
KTLA5
KTLA 5

A Los Angeles Police Department motorcycle officer and a bicyclist were injured in a crash in the Sepulveda Basin early Monday afternoon, officials said.

The collision took place just after noon in the 16400 block of West Burbank Boulevard, according to a Los Angeles Fire Department alert.

The motor officer and cyclist were both transported to a local trauma center, the alert stated.

Their conditions were not immediately known.

No additional details have been released about the collision.