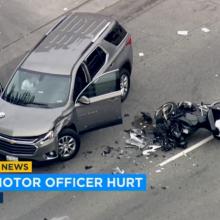 A Los Angeles police motor officer was injured in a collision involving an SUV in Van Nuys on Friday morning.
ABC7
ABC7 News

The crash happened in the 6900 block of Van Nuys Boulevard around 10:15 a.m., the department said.

AIR7 HD was over the scene, where the frontend of the officer's motorcycle appeared to be completely destroyed and the front tire dented.

The officer was taken to an area hospital in unknown condition. The officer appeared to have a neck brace on while he was being transported by a stretcher into the hospital.

Information on additional possible injures was not immediately available.

Both directions of Van Nuys Boulevard from Hart Street to Vanowen Street were blocked off while police investigated.

The cause of the collision has not yet been determined.