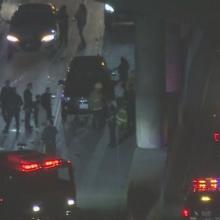 An LAPD officer was injured in a crash on the northbound 170 Freeway near Magnolia Boulevard Thursday evening.

The northbound side of the freeway is completely shut down. Traffic is at a standstill. Drivers are advised to used alternate routes.

It's unknown when the freeway will reopen.

According to the California Highway Patrol, the collision occurred between the LAPD motorcycle officer and a 2008 Ford Escape.

The officer appears to have suffered non-life threatening injuries. The condition of the driver is unknown.

The cause of the crash is under investigation. No further details were immediately known.