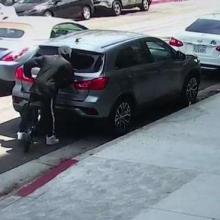 Crafty crooks take Hollywood by storm. They pulled off more than 40 car break-ins last weekend alone, and police say they've been in these streets before.
Associated Press
NBC Los Angeles

Police said Thursday that they've broken up a band of scooter-riding robbers from the San Francisco Bay Area who busted into 40 cars over the weekend in Los Angeles.

The thieves traveled to Hollywood and used ride-sharing scooters to hit dozens of cars near the tourist-heavy Hollywood and Highland intersection, site of the TCL Chinese Theatre.

Surveillance video of one of the thefts provided by LAPD shows a man ride a scooter to the back of a car, bust out its window, grab a bag inside and pass it to another man on a scooter before the two zip away.

The Hollywood area may be an attractive target because of all the tourists, Los Angeles Police Capt. Cory Palka said.

Palka said such thefts are an ongoing issue and that thieves have been taking stolen items up to Oakland to sell them on the street.

Palka said five arrests have been made and that the LAPD and Oakland police have paired up on the ongoing investigation.