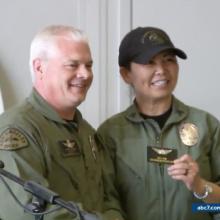 The Los Angeles Police Department has named its first female Asian-American to become a supervisor pilot in the air support division Thursday.

Sgt. Janet Kim accepted the promotion during her command pilot wings ceremony. It was a particularly momentous occasion for the Asian-American community.

Kim has been with the LAPD for more than 19 years. The Korean-American said it is a dream job for her and she doesn't know how she made it, but she persevered.

"I believe 60 plus sergeants applied for this job. When I turned in that application, I thought, why not? All these years, basically, I worked toward this job. To be given this opportunity to be a part of this team is extraordinary," she said.

She also had inspirational words for anyone who has big dreams, saying "you are more capable than you know."