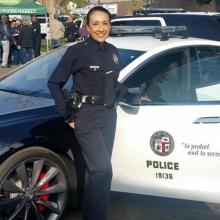 An LAPD officer has died after surgery related to a 2015 traffic collision that occurred while she was on duty, police said Tuesday.

Officer Esmeralda Ramirez passed away over the weekend, according to a Los Angeles Police Department news release.

“Her death is a reminder of the potentially life altering and tragic events that an officer faces every day they come to work,” LAPD officials said.

Ramirez, a mother of three adult children, joined the department in 2008. She was assigned to the Pacific Division, where she worked a variety of assignments.

“Her commitment to her follow officers and this Department is only eclipsed by the love she had for her family,” the release read.

LAPD did not immediately provide information about the on-duty crash that resulted in Ramirez’s death.

A fundraising page to help Ramirez’s family has been set up through the non-profit organization Badge of Heart. More information can be found here.