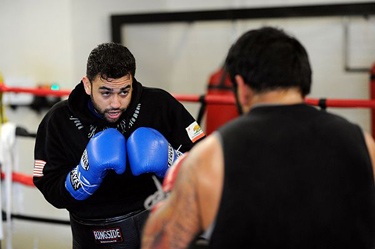 It took a few stumbles -- a childhood arrest, teen fatherhood -- for Juan Bustamante to develop the discipline and mettle to get where he is today: one fight away from being declared one of the toughest cops in California.

"Bad Blood" Bustamante, a 28-year-old officer with LAPD's Foothill Division, will box for the state championship title in a March 31 "Battle of the Badges" bout sponsored by the United Combat Association, the ranking organization for amateur fighters from law enforcement, firefighting and the military.

He will face James "Doin' Damage" Davis, 30, a guard from Folsom State Prison who is UCA's top-ranked light heavyweight boxer in Northern California. Opponents describe Davis as a tireless fighter with a nearly impenetrable defense who has never been knocked out.

Although the 175-pound Bustamante has beaten all his opponents in UCA's ranked fights, including knocking out the previously undefeated Southern California champion in his weight class, he's still considered raw. But speed, footwork and power are working in his favor, according to those familiar with his fighting style.

"He's young and has a lot of heart," said Tom Gaffney, UCA's ratings chairman. "Little changes to his game can really take him to the next level. But God, he's got so much potential."

The trash-talking is already under way for the big fight. Davis says he's unfazed by his opponent and predicts a knockout in the second round.

"It's probably going to be a normal day at the office for me," Davis said. "When the 31st comes, he's going to have a real bad night."

"I feel really good," he said. "I'm very confident. He hasn't been hit by anybody as strong as me."

Bustamante, who's been on the force for four years and is a member of the LAPD boxing team, credits a troubled childhood with helping him find his passion, something he hopes will take him into the professional fighting circuit in a year. 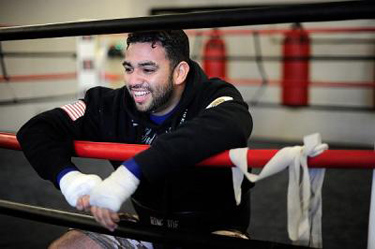 LAPD Officer Juan Bustamante will fight for the state light heavyweight boxing title as part of the United Combat Association, the ranking organization for amateur fighters who are in law enforcement, firefighting or the military. (Hans Gutknecht/Staff Photographer)

"This is a huge test for me," Bustamante said. "It's to signify myself as a champion, not just a competitor. I've beaten who I need to beat down here in Southern California. Now if I can beat the best of the best up north, then I'm a state champion, not a sole local city champion."

As a kid growing up in Azusa, Bustamante was already hanging with the wrong crowd, acting up at school and disrupting classes.

He got himself arrested at age 12. He and some other kids had ditched school, broken the windows of a local home and vandalized it, spraying graffiti on its facade.

"I wasn't thinking," Bustamante said. "I just wanted to be with the in crowd, with the bad kids."

He ended up doing community service at the Azusa Boxing Gym -- and that was what saved his life, he said.

He started boxing at 14, after his parents decided it could be an outlet to keep him off the streets and away from gangs.

In the ring, he learned resiliency and discipline -- things he's applied to the sometimes turbulent relationships in his personal life. His father wasn't in the picture much, and all four of his children are from different mothers.

"I get knocked out, but I get up. I get up and I keep fighting," Bustamante said. "I think that's pretty much the story of my life. You have to have that will to keep fighting."

When he discovered he was going to have his first daughter while still in high school, Bustamante was forced to grow up quick. He enlisted in the Navy to provide for his new family.

It was in the service where he picked up the nickname "Bad Blood" in unsanctioned fights, after a discussion about just how "bad" -- or good -- he was, and how boxing was in his blood.

His daughter was born two weeks before he deployed to Iraq in 2003. He counted the days until he would see her again: one year, six months and five days.

"I'll never forget that number," Bustamante said. "It sticks in my head because for a year and six months, I didn't see her. She didn't even know who I was."

And when he heard that LAPD was recruiting from the military, he saw it as a way home and a chance to become a cop -- something he'd always wanted to do.

"I made a lot of mistakes in my life. I've done a lot of bad things. Doesn't make me a bad person, I just made bad mistakes. But I'm trying to correct them now.

"Right now, I'm content with my life," Bustamante said. "Because I get to do what I love."