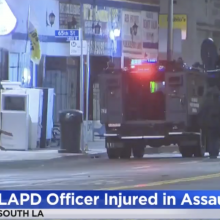 LOS ANGELES (CBSLA) — An officer was hit in the neck with an unknown object, possibly a pellet gun, prompting a standoff in South LA early Thursday.

The officer was patrolling the area of 69th and Denker Avenue at about 11:30 p.m. when he was struck in the neck. The object that hit him was initially believed to be a paintball, but is now believed to have been a pellet from a pellet gun.

At least three suspects may have been taken into custody after a standoff.

The officer is being treated at a hospital and is expected to be OK.