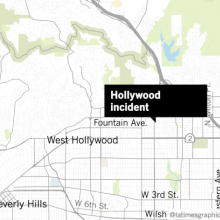 A Los Angeles police officer was injured Monday after a man carjacked a driver at a Hollywood fast-food restaurant, crashed the car and then charged at officers with a machete, authorities said.

The Los Angeles Fire Department received a call about an assault at 11:30 a.m. Firefighters and LAPD officers arrived at the 1400 block of North McCadden Place near Sunset Boulevard and Highland Avenue and found two people with injuries, including an LAPD officer.

The officer was treated at the scene with injuries that were not life-threatening.

Officers fired at the suspect, gravely injuring him, after he charged toward them with a foot-long machete, law enforcement officials said. He was transported to a hospital, where he died.

Officials said a man carjacked a Chick-fil-A customer in a Lexus on Sunset Boulevard, after committing a robbery at knife-point at a nearby auto parts shop. The man then collided with a police cruiser before the shooting unfolded.

By 11:45 a.m., a student at El School of Professional Makeup, located across the street from the Chick-fil-A, reported the area was on lockdown.

LAPD Capt. Steve Lurie said traffic would be closed in the area for the next several hours as officials continue to investigate.