Skip to main content
12
Jul 2018
An LAPD officer needed help — for his daughter. His Devonshire Division colleagues heard the call 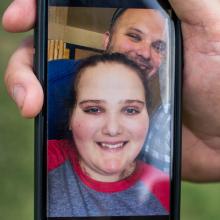 LAPD Sgt. Ben Herrera shows a picture of him with his 15-year-old daughter Gracie during a benefit BBQ to raise money for her medical bills on Wednesday, July 11, 2018 at LAPD Devonshire Station. Gracie Herrera, 15, has been in the hospital since March recovering from acute respiratory distress syndrome (ARDS).
Marianne Love, LA Daily News
An LAPD officer needed help — for his daughter. His Devonshire Division colleagues heard the call

It was more than hot temperatures that were sizzling in Devonshire Park at lunch time on Wednesday.

Officers and cadets from LAPD’s Devonshire Division were serving up grilled hamburgers and hotdogs at a fundraiser for a fellow sergeant’s 15-year-old daughter who nearly died from acute respiratory distress syndrome while on spring break here in Los Angeles four months ago.

Gracie Herrera, who attended schools in Camarillo for many years before moving to Arizona with her mother and brother, came to visit her dad earlier this year. She’s been hospitalized since then and is now transitioning to a rehabilitation facility, where she is expected to recuperate by the end of this month.

“It was the most horrible perfect storm any kid can ever go through. A sequence of events that couldn’t happen in any worse order,” Herrera said. “I believe there was a little bit of divine intervention. We saw several kids die while we were in the hospital.”

Herrera said his insurance with the LAPD is very good, but there are expenses that just aren’t covered.

“She lost 55 pounds. She’s going to need new clothes,” he said, adding that his daughter is still trying to make sense of what happened. “She is asking ‘Why me? Who picked me for this?’. She has memory laps from March 15 to April 15 or 16, when she was in a medically induced coma. She has scars on her body from multiple surgeries, IVs and they had to cracked open her chest to get to her heart. She is struggling emotionally and like any normal adolescent.”

Herrera said his daughter’s medical bills are at the $2-million-plus level.

LAPD Officer Don Magers was one of the organizers of the afternoon barbecue across from the station where tents, tables and chairs where sent up and around 200 officers, support staff and community members were expected to gather in the sweltering heat and high humidity.

Both Magers and Herrera work out of the Devonshire station in Northridge and have military ties through the U.S. Navy.

“We (LAPD) like to help. It’s the right thing to do and we are family,” Magers said.

Magers said he hopes to raise $4,000 from the barbecue to help bridge the financial gap of mounting costs and to meet the high schooler’s near-future needs.

“We wanted to help his daughter and him and his family. The military side is also big with me,” Magers said.

The meat, fixings and drinks were donated by police officers.

A custom 8-foot-long smoker or competition cooker was center stage.

Mortgage lender, Terry Miller, brought it from the Santa Clarita Valley especially for the occasion at no cost to the police department.

“After real estate open houses, any food that is left over is taken to local fire departments. One of the reasons I had this built is to be able to give back to the county and have fun doing it,” said Miller, a former Northridge resident.

Donations for the Herrera family can also be made at www.lapd.com/donate/herrera (Los Angeles Police Protection League).

Check donations should be made payable to “Blue Ribbon Trust for Benjamin Herrera” and mailed to: