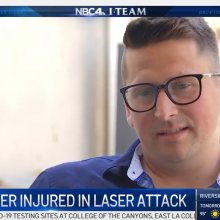 An LAPD officer was partially blinded after someone deliberately pointed a green laser at him in downtown Los Angeles.

"I consider myself a pretty strong person, but these migraines have been bringing me to tears," Officer Kyle Rice told the NBC4 I-Team.

He said he's lost vision in his right eye, suffered from debilitating headaches, and has had trouble balancing ever since he was struck with the laser beam July 16.

"I have to lay down all the time, and then I gotta figure out, you know, I can't stop being a dad to my two girls or being a husband to my wife," he said.

The laser assault happened as Rice arrived at a radio call near Second and San Pedro streets in the Little Toyko area. He said he was dispatched to resolve a recurring dispute between a business owner and a homeless person who slept in the business doorway.

Someone unrelated to the call aimed the laser at Rice from a balcony on the fourth floor of an apartment building nearby.

"I just felt my, my right eye was on fire," Rice said.

Rice can no longer drive and said he's been seeing medical specialists to learn the extent of the damage.

USC Keck Medicine neuro-ophthamlogist Dr. Kimberly Gokoffski, who is not treating Rice, said that lasers can cause permanent damage to the retina, depending on how the beam was aimed, the power of the laser, and the duration of the exposure.

"It just depends on where the damage was done," she told the I-Team. "In the end lasers are like staring at the sun, it's very dangerous for the eyes, and unfortunately causes permanent damage."

Lasers have become a renewed concern for police on the ground, after being a well-known hazard for helicopter and airplane pilots. During recent protests in Portland a few people in the crowds of demonstrators aimed lasers into the faces of police officers.

Last week the U.S. Attorney's Office in Portland charged three men for alleged violent acts during protests, including one individual suspected of shining a laser at officers intending to do harm.

The LAPD has also addressed the growing worry that lasers will be used to try to disrupt the vision of officers in LA. A new memo from Chief Michel Moore directs officers to try to, "adjust their vision away from the laser," if one is seen, and urges officers to try to de-escalate situations without using force.

Moore's memo also said officers would be given new types of eye protection.

Rice said he's dedicated his adult life to helping others, and volunteers off-duty in a ministry group that works to assist people experiencing homelessness.

“I love our department, I love our city,” and said he hoped that discussing his injury publicly could help those intent on doing harm consider the potential consequences.

"I just hope that maybe we can drop this and really see that instead of hurting each other maybe we should just start talking to each other a little more."

A 45-year-old man suspected of shining the laser at Rice was arrested by other officers and was later released from jail. The Los Angeles County District Attorney's Office said Thursday it had not yet received case information from the LAPD so no criminal charges have been filed.