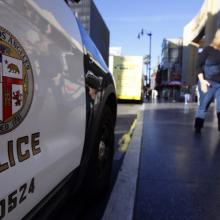 An LAPD officer was injured Sunday night after being struck by an arrow fired from a crossbow during a standoff with a man in North Hollywood, authorities said.

Officers were initially called to a residence on Bakman Avenue near Ostego Street around 6:45 p.m. after reports of an assault with a deadly weapon, LAPD Officer Mike Lopez said. Police were alerted to a man wielding a rifle.

The LAPD’s North Hollywood Division urged residents of the area’s Arts District to stay inside as officers negotiated with the man, who had barricaded himself in his home.

SWAT was called to the scene, and officers were in the process of evacuating the building at about 10:30 p.m. when the man fired a crossbow at police, LAPD spokeswoman Norma Eisenman said.

Officers returned fire but did not strike the man, authorities said.

“SWAT officers then deployed a chemical agent,” Eisenman said, “at which time the suspect exited his apartment and was taken into custody.”

The wounded officer was treated at a local hospital and released, police said.

Neither the suspect nor the wounded officer have been identified.

LAPD’s Force Investigation Division, which handles all incidents that involve use of deadly force by officers, is investigating, Eisenman said.