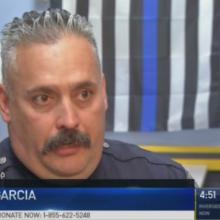 Three LAPD officers are being honored by the city of Los Angeles for their efforts to save a motorcyclist who was engulfed in flames during a hit-and-run crash, and later died. Kathy Vara reports live for NBC4 News at 4 p.m. on Friday, Sept. 1, 2017.
NBC Los Angeles

Three Los Angeles police officers will be honored by the city after risking their lives in an attempt to save a motorcyclist who was engulfed in flames after a hit-and-run crash.

The rider, a man in his 20's, was struck by a hit-and-run driver just off Olympic Boulevard and Lawrence Street.

One of those officers, Sgt. Jesse Garcia, put his arms into the flames to pull the victim out.

"I saw a person in the flames that was also fully engulfed and on fire and that person wasn't moving," Garcia said.

Sgt. Alex Mendoza rushed to his car to grab a fire extinguisher.

"I was trying to avoid some of the heat, but no matter where I went, it was hot," Garcia said.

That's when Garcia made a split-second decision to use his bare hands to grab the man on fire.

"I told myself the longer he is in there, the less chance he has of surviving and just went in there and pulled him out," he said.

As Mendoza was running back to the scene with the fire extinguisher, he saw Garcia rushing into the flames and grabbing the motorcyclist by the arms.

As the officers started rendering aid, they fortunately heard him gurgling, which meant he was breathing.

"I'm not sure if he could hear me or not, but I just did my best, so hopefully he could realize help was on the way," said Officer Sam Hui.

The motorcycle had a modified gas tank, which caused the flames to be a lot stronger, officers said.

Garcia suffered burns to his face and arms, causing permanent nerve damage, but he says the injuries were worth it.

"If someone's in trouble and I'm in a position to help, I feel a moral obligation to do so. Even if it means putting myself in danger," Garcia said.

Unfortunately, despite their efforts, the rider did not survive.

"It's one of those things that gets engraved into your mind," Mendoza said.

"At least because of the actions the three of us took, his family was able to be with him in his last days," Garcia said.