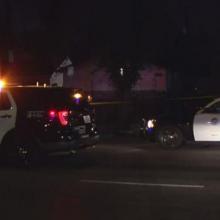 A motorist plowed a car into a stopped police car in South Los Angeles Sunday, injuring two patrol officers, and the driver was arrested on suspicion of drunken driving.

The officers had stopped their patrol car for a routine traffic stop on Gage Avenue, between Main Street and Broadway, at about 1 a.m., said Officer Jeff Lee of the Los Angeles Police Department's Media Relations Section.

The patrol car was hit from behind, and shoved into vehicle they were investigating, Lee said. There was no one in it at that moment.

The officers were injured, but were not taken to hospitals.

The driver who triggered the crash was arrested on suspicion of drunken driving. It was not immediately known if he was injured, Lee said.