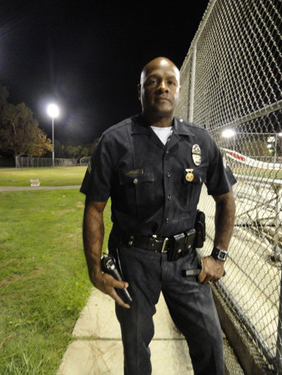 In the eight years that Craig Orange has patrolled the streets of Eagle Rock, scores of residents have become familiar with the tall, muscular and ever-cheerful man from Pasadena who is something of a fixture in the Eagle Rock community.

Friday, Jan. 25, will be the last day that "Officer Orange," as he is fondly called, will spend in Eagle Rock as senior lead officer. As part of a reshuffle of senior lead officers across the LAPD's Northeast Division, he will be working in East Hollywood, starting Jan. 29. Orange is scheduled to be replaced by Senior Lead Officer Nina Preciado from Highland Park.

On Thursday night, Orange presided over his last Eagle Rock Community Neighborhood Watch Block Captains meeting at Eagle Rock City Hall. Some 30 people turned up for the monthly event. They brought a cake to bid the officer farewell. "Oh, please don't go, Officer Orange," more than one of them cried. "We're going to miss you."

Orange knows Eagle Rock like the back of his hand. He has been with the Northeast Division since 2005, working as a patrol officer until 2008 and as senior lead officer thereafter. He spent a year in the neighborhood during his probation in the 1990s.

Orange has worked with several task forces at Eagle Rock Plaza to help reduce the number of cars stolen or broken into in the area. He has tried to ensure that drug problems among some of the homeless people in Eagle Rock don't get out of hand. He was lately in the process of trying to find shelter for some of the homeless in conjunction with the office of Council member José Huizar and the Department of Mental Heath and the Department of Social Services. He has tried to reduce overnight parking by recreational vehicles in residential areas.

In his efforts to improve the neighborhood's quality of life during his patrols from 2 p.m. through midnight, Orange has developed deep connections with many residents. He likes to tell the story of a Dahlia Drive resident who bought a brand-new Mercedes a few years ago. "She used to joke around with me that she got a new car, and that she hoped it would be safe," said Orange. "I said, Hey, I can guarantee that your brand-new car will be there when you wake up-it won't be broken into or stolen," he recalls, adding: "When I see her, she gives me her thanks."

Orange has focused special attention on senior citizens who live alone by themselves. "At night they have no one there, so I give them extra patrols so that there are no prowler complaints or any suspicious vehicle or pedestrians in front of their house late at night," he said. "A few people will have their lights on, and when they see me patrol down the street, they look out the window and wave at me and turn their lights off, knowing that I'm there to watch over them."

The senior citizens include a 105-year-old woman who lives toward the eastern edge of Eagle Rock and who has been the victim of at least one robbery and an attempted robbery. "I always go out there and see how she's doing," said Orange.

The ties that Orange has with Eagle Rock were most strikingly evident when his daughter got sick in June 2011. "A lot of people wished her a speedy recovery," the officer recalls. "Everybody told me, Anything you need, let us know-we'll be praying for you and your daughter. There were teddy bears sent to Children's Hospital."

When his father died last October, half the people in the Pasadena church where his services were held were from Eagle Rock.

"It's a personal connection I have with this community," Orange said, almost choking up as he talked to Patch in Eagle Rock City Hall after his final Neighborhood Watch meeting Thursday. "Even off duty, when I'm not on the job, I shop and frequent some of the restaurants in here. Eagle Rock is like a home away from home. And that's why it's kind of tough to just easily walk away."

Orange learned about the Senior Lead Officer reshuffle the week before Christmas. "It's been hard," he said. "I feel like I am leaving a family. Eagle Rock is family to me." And although he told the Neighborhood Watch meeting that he will continue to be in touch with Eagle Rock, his familiar presence not just on the streets but also at community events will be sorely missed.

It's not as if Orange doesn't realize what many of his colleagues have told him-that it's best not to get too attached to the job in a particular community or the people a police officer serves. "But you're human-you just can't help it," said Orange. "There are certain things in this job you can become desensitized to, and there are certain things you just have a heartfelt connection with."

The Challenge of Change

Capt. Murphy understands Orange's connection with Eagle Rock. But "he stated that change is-you know-good," Orange said. "He said that since I'm very 'operational,' my services can be used in East Hollywood. I'm all for the gratitude and respect. So I'm going to put myself in the mind frame of going out there and hopefully change that community as well."

Orange knows it's going to be challenging to patrol a neighborhood that is far more commercial than Eagle Rock. "East Hollywood has a unique set of quality of life issues and crime trends," he said. "You have robberies. You have a lot of transients who are assaulting each other. You have people who don't reside within the community but who visit the area and get involved in some type of crime activity-anywhere from robbery and burglary to breaking into a car and committing assaults on victimless people."

What attracts crime in East Hollywood is its "great restaurants, hospitals, the Metro-transportation is easily accessible around the community," Orange said, adding, with a laugh: "You commit a crime and hide out."

A farewell party, most probably hosted by Huizar's Council District 14 office, is planned for Orange, he said. No date has yet been set.