What began as a welfare check at a Venice apartment building ended with an act of kindness one World War II veteran said on Monday he will never forget.

Concerned neighbors called police Friday asking that a welfare check be done after they had not seen or heard from Herman Perry in an unusually long time, the Los Angeles Police Department said.

Officers Natali Nunez and Abel Torres responded, and found that the 94-year-old man was well, but hard of hearing and unaware of his neighbors' concerns.

"He told us that not too many people stop by anymore," Torres said. 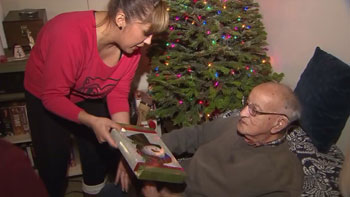 Moved by the encounter, the officers drove by a Christmas tree lot around 1 a.m., after leaving the residence.

"It could be anyone's grandpa," Nunez said of Perry. "We just felt like he needed some holiday cheer."

Although the lot was closing, Nunez said they stood outside yelling, trying to get someone's attention.

The lot owner walked over, and after hearing their story, not only let them inside but donated a tree, two sets of lights, mistletoe and candy.

Perry seemed more than surprised by their actions.

"I can't believe all this going on. This never happened to me," he said while smiling.

The pair later came back with Christmas presents donated by fellow officers, and feeling good that they had done something nice for a veteran.

"Hopefully we can give him something that shows that, hey, you're loved, you're cared about," Torres said.