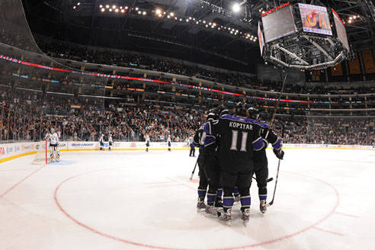 L.A. Kings will celebrate their first Stanley Cup Championship with a sold out parade in Downtown. (LA Kings/Bernstein Associates)

Thousands of people are expected to attend the sold out L.A. Kings celebratory parade Thursday in Downtown.

Shortly after the Kings defeated the New Jersey Devils 6 to 1 in Game 6 of the Stanley Cup Finals, details on the parade were announced through the team's website.

Regular season ticket holders had priority on the free tickets made available to the public early Tuesday. The rest of the 18,000 tickets were distributed on a first-come, first-service basis at 6 p.m. and sold out hours later.

LAPD wouldn't release an exact amount of officers that will be on hand for the parade, but said there would be a sufficient amount to handle the crowds estimated in the thousands. They wanted the public to know that any act of vandalism or offense will not go unpunished.

"There's going to be zero tolerance to anyone committing a crime," officer Rosario Herrera said. "If you commit a crime, you will be arrested."

The parade starts at noon at Figueroa and West 5th streets and end at Staples Center and L.A. Live, according to a news release. The parade is expected to last approximately 30 to 45 minutes.

A "Championship Rally" inside of Staples Center will conclude the festivities at 2:30 PM. The hour-long rally will include video highlights, player and coaches introductions and other special presentations and surprises.

Figueroa Street between 3rd Street and Pico Boulevard, 11th Street/Chick Hearn Court between Figueroa and Cherry Street, and L.A. Live Way between Olympic and Pico boulevards will be closed starting at about 4 a.m. Thursday. LAPD estimates the streets will reopen about 2 p.m.