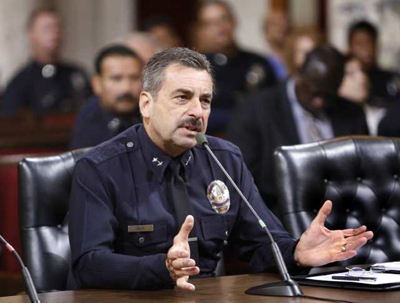 The Los Angeles Police Department plans to remove 150 officers from patrol or other assignments in order to deal with the state's prison realignment plan, a move that Chief Charlie Beck said will slow police response times to 911 calls.

Beck and Mayor Antonio Villaraigosa criticized the state's controversial attempt to relieve severe overcrowding in its prisons for not providing adequate funding to the city and warned that the move threatens to reverse the falling crime rates L.A. has experienced in the last decade.

The plan, which went into effect Saturday and is intended to satisfy an order issued by the U.S. Supreme Court, shifts responsibility for thousands of inmates and parolees from the state to county authorities.

As part of that shift, Beck said the LAPD and other local police departments will now have to assume a leading role alongside the county's Probation Department in keeping tabs on a "cascading" number of ex-cons who otherwise would have been under the watch of the state's parole department.

By year's end, the LAPD is expected to be tracking 4,200 offenders, according to figures released by the mayor's office. Statewide, officials project that county agencies will assume responsibility for about 55,000 people by the time the realignment program is fully implemented in 2015.

Beck and Villaraigosa, along with City Controller Wendy Greuel and gang expert Connie Rice, used a morning news conference to rebuke Gov. Jerry Brown and state legislators for leaving the city to fend for itself and to publicly pressure them for funds.

"There is nothing in alignment about this act," Villaraigosa said. "Sacramento is transferring more than 4,200 offenders to Los Angeles and not a single dollar to help with the burden. This is not alignment, this is a recipe for making the problem much worse."