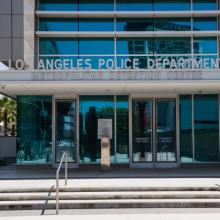 Nine Los Angeles Police Department employees have tested positive for COVID-19 as of Monday, the department reported this afternoon.

According to a department statement, 8 are sworn officers and one is a civilian. "All of these individuals are now quarantined at home and recovering," the statement reads.

"The Department has strict protocols for any employee who experiences symptoms of the virus. They are instructed to go home and their workspaces are sanitized."

LAPD officials told KPCC/LAist that the department will soon shift to longer hours and change up some protocol in response to the coronavirus pandemic.

A department spokesperson said LAPD is gearing up to go to a "mobilized" state, which means officers will work 12 hour shifts with 12 hours off.

Craig Lally, president of the police officer’s union, the Los Angeles Police Protective League, is a 40-year veteran of the force who said he’s mobilized before during earthquakes and the 1992 L.A. riots. He said the long shifts can be grueling.

“You can barely keep your eyes open because sometimes, that 12 hour watch turns into like a 15 or 20 hour watch,” Lally said.

The L.A. Times reported that an officer who tested positive for COVID 19 last weekend worked for two days before being sent home. A department spokesperson told KPCC/LAist that employees and officers are expected to self-report to supervisors if they feel unwell.

Officers are also being allowed to wear breathable, cotton uniforms they can wash themselves at home, in place of their regular wool uniforms which require dry cleaning.

And some officers working administrative assignments or who fit into “at-risk” groups more vulnerable to the virus are working from home.

But a female LAPD officer who did not want to be identified told KPCC/LAist that given the nature of police work, that’s not a long-term solution.