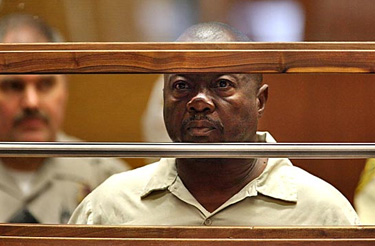 During a sparsely attended community meeting at a Bethel A.M.E. Church in South Los Angeles, officials also provided information on six additional women whom they say were slain by by Franklin.

Los Angeles Police Department detectives said they have now linked Franklin, 59, to the six additional murders, bringing the total number of women he is believed to have killed to 16.

Franklin, suspected of being the so-called Grim Sleeper, is already charged with murder in the slayings of 10 women whose bodies were found on the streets of South Los Angeles over two decades.

Police Chief Charlie Beck and others urged those in attendance and the media to help police identify women in photographs discovered at Franklin's home. Last year, police published the faces of the roughly 180 women. They are still trying to identify 48 of them.

"We may never know how many young women Lonnie Franklin killed," Beck told the crowd, "but we are going to do all we can to find out."

Police have made the strategic decision not to seek additional criminal charges from prosecutors in the new cases. That move was criticized by Franklin's attorney, Louisa Pensanti, who said it does not allow her client to defend himself against the allegations.