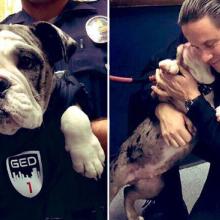 A rare English bulldog puppy is on its way home thanks to cooperation between police officers in Illinois and the Los Angeles Police Department.

The blue merle English bulldog puppy was taken from a pet store in Naperville, Ill. on Dec. 18. It was 10 weeks old at the time. A local family had planned to bring the dog home as a Christmas surprise before it was stolen, according to a statement from the pet store.

Local police identified a suspect and followed his social media accounts to learn he lives in Los Angeles, the LAPD said. The Naperville police asked the LAPD for help finding the puppy. The LAPD’s first attempt to locate the suspect came up cold, but the department stayed in touch with Naperville officers, who were continuing to track the suspect’s accounts.

On Sunday, the trail led LAPD officers to another location, where the suspect and dog were spotted. The suspect was taken into custody and the dog was unharmed, the LAPD said.

The dognapping is believed to be part of a larger theft ring, according to the department. Arrangements are being made to send to puppy back to Illinois, but not before it was given a tour of the station and a chance to thank the officers.

On Sunday, the LAPD posted photos of the dog's new family, who came all the way from Illinois to bring him home.