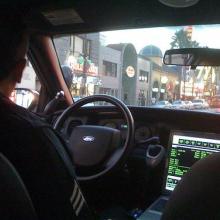 LAPPL Board of Directors

At the invitation of the President of the Los Angeles Police Commission, I went on my second LAPD ride-along last night. This time it was with officers from the Hollywood-Wilton station. I attended roll call and was issued a kevlar vest to wear underneath my shirt and assigned a sergeant to start the evening. Per the Commissioner's plan, we switched cars throughout the night and accompanied regular street patrols as well as riding with a supervisor from the CREW program.

CREW is LAPD's experimental program to put heavily supervised younger police officers in areas with spikes in criminal activity. Their aim is to be pro-active in enforcing traffic and warrant violations to both act as a deterrent to criminals via their increased visibility and catch more bad guys by running their info at the time they are stopped. They find a lot people with arrest warrants, open containers, weapons and stolen property this way. It seems to be working in areas where CREW patrols have been deployed.

We were provided with a quick stand-up dinner by a local neighborhood watch group that kept a joint LAPD-LA County Sheriff task force supplied with food and drinks in a parking lot alongside Sunset Blvd. These folks volunteer their time and money to keeping officers fed in appreciation for the remarkable drop in crime their presence has brought. An LAPD piece of wisdom we heard at dinner was "Always eat and try not to get wet!" I happen to already live by this code.

Though we patrolled some areas with heavy gang activity ("don't be surprised to hear rounds going off"), we didn't encounter any dangerous situations. The most tense part of the night involved being in the same area as reported armed robbery suspects. Two guys robbed some folks at gunpoint and fled on foot into a residential area off Hollywood Blvd. Our patrol car arrived on scene a moment after the call came in and we slowly patrolled the surrounding streets for the armed suspects. Our lieutenant escort promised not to involve us, just that he'd call in the location of the suspects if we spotted them. No such luck.

Most of the activity of the evening was dropping in on traffic stops and observing as officers cited people for open containers, possession of marijuana and other controlled substances, and in one case, curfew-breaking by little kids that looked way too young to be out walking along Sunset near midnight ("we cite 'em and drive them home if they're close, otherwise call their parents to pick 'em up).

I was impressed by the attitude of all the men and women I met that night. It was uniformly "we're here to catch the bad guys and keep everyone safe". Some of them had quiet conversations with the Commissioner to discuss resource needs or upcoming policy decisions that might affect them. They all conveyed a sense of not having the personnel and equipment to do their job more effectively, but were also proud of the fact the LAPD has modernized its methods and approach to law enforcement (SWAT recently got its first female member) resulting in the lowest rate of crime in the city since the 1970's. Another statistic that I heard is that on any given night, only about 200 squad cars patrol the 472 square miles of the city. Talk about a thin blue line.

The officers of the LAPD Hollywood station couldn't have been more hospitable or open throughout the night. I really appreciated the opportunity to see them at work. A few photos from the evening can be found here.