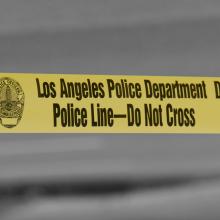 The Los Angeles Police Department is asking for the public’s help in identifying a murder victim whose body was charred and the person suspected of the homicide.

Police said detectives with its Robbery-Homicide Division were told about a fire-related death investigation in the Los Angeles River Basin near 6400 Balboa Blvd. in the Lake Balboa area on Tuesday.

The charred body of a man was found in a shopping cart, officials said. Earlier that day, the Los Angeles Fire Department responded to reports of a brush fire close to where the man’s body was found.

Authorities said the decedent’s remains were examined Friday at the Los Angeles County Department of the Medical Examiner’s Office. That examination determined that he died as a result of a homicide.

The person’s identity is still unknown at this point, according to the Medical Examiner’s Office. No information was immediately available on a suspect or suspect description.

Anyone with information can contact Det. Matthew Casalicchio or Detective Tim Marcia at 213-486-6890.