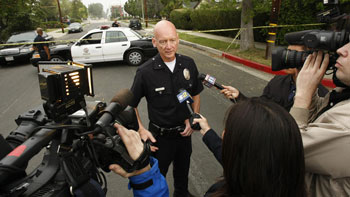 The Green Bay Police and Fire Commission announced Tuesday that Smith has been offered the position -- a day after meeting with him and two other finalists. One of the candidates was a Green Bay captain, the other an acting chief in a small Wisconsin town.

"I am excited to bring Chief Smith in to lead the talented men and women of the Green Bay Police Department," Mayor Jim Schmitt said in a statement.

The commission said in a statement that the job offer was "conditional upon Mr. Smith satisfying certain pre-employment requirements."

About 190 officers are tasked with patrolling Green Bay, a city of about 105,000 residents. Smith, who was born in Wisconsin and grew up in neighboring Michigan, said Tuesday that he was "really excited about the opportunity."

Smith said he hoped to build upon community policing efforts in Green Bay.

"The Police Department in Green Bay is a first-rate organization," he said. "I've met dozens of officers back there and they are a hardworking, professional, community-oriented group of officers."

Most recently, Smith has led the LAPD press office, coordinating news conferences, speaking with reporters and conducting interviews on behalf of the department.

He has been the face of the LAPD during several crises, including during protests in the last two years over shootings by police and as the department faces questions about rising crime. He's worked in various other divisions across the city and is well-regarded among fellow officers and many residents.

Smith oversaw the LAPD's Central Division in the mid-2000s, when the department focused more resources on skid row. He championed efforts to end the practice by hospitals and other law enforcement agencies of dumping mentally ill people in the area. At one point, he complained that he had seen two sheriff's deputies dump a mentally ill man on the street rather than take him to a mission.

The LAPD's skid row initiative drew praise from some community leaders for reducing crime and cleaning up the area. But some advocates for the homeless faulted the program, saying it unfairly targeted poor and mentally ill homeless people with numerous tickets that led to jail time for some.

When he moved to his next assignment in South L.A., the Downtown News declared it "the end of the Andy Smith era."

LAPD Chief Charlie Beck said Smith also showcased an "ability to communicate" when he worked in Central Division, balancing what the chief described as "very difficult, complex interactions" that come with police work in that community.

Smith has a "nice, folksy manner that makes all of us feel that we know him," Beck said.

When he moved to the press office, Beck said, Smith "did a great job during some very difficult times," including the Occupy L.A. demonstrations, manhunt for Christopher Dorner and Beck's reappointment last summer.

"He's been highly effective no matter where he's worked," Beck said. "When he told me he was applying for the job, I automatically assumed he was going to get it."

Smith said the time line for his move to Wisconsin has not been finalized, but he guessed it would happen around the first of the year.

"Obviously it's bittersweet because I've had such a wonderful career here and thoroughly enjoyed working in Los Angeles," Smith said. "But I'm ready for new challenges - and maybe a little cold weather."

"I've got to go out and buy a pair of thermals," he joked.