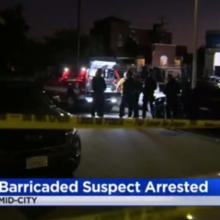 Officers negotiated with a suspect who was barricaded inside of a Mid City home Wednesday evening, eventually taking him into custody.

The barricade began around 5:15 p.m. in the 2100 block of Orange Drive after Los Angeles police officers attempted to take Austin Navarro into custody.

Navarro, who is accused in two separate shootings this month, refused to surrender to police and locked himself inside of the home.

Views from SKY9 showed people being evacuated from the home.

Around 9:15 p.m., SWAT officers shot tear gas into the home, forcing Navarro out.