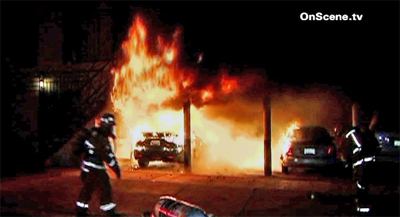 Fire at apartment building at Lexington and Curson (KTLA-TV)

Authorities are searching for one or more suspects after a rash of arson fires in West Hollywood and Hollywood early Friday morning, including one that damaged the former residence of Jim Morrison.

At least 19 fires have erupted, officials said. The fires have mainly started in vehicles or carports.

The LAPD declared a tactical alert around 4:20 a.m. to mobilize additional resources. It was canceled at 6:35 a.m.

The LAFD also doubled the number of arson teams on call from two to four.

Six of the fires were in West Hollywood, according to LAFD Chief Mario Rueda. Three of the West Hollywood fires spread to structures, Rueda said.

It all began just after midnight, when the West Hollywood Sheriff's Dept. received three calls within about 11 minutes about vehicle fires.

One fire burned vehicles in a carport at an apartment building at Curson and Lexington. The building sustained exterior damage only.

A second blaze was reported in the 1000 block of Genessee Avenue, and third was set in a carport at an apartment in the 7700 block of Romaine Street.

While firefighters were busy working on those blazes, another fire erupted about 1:18 a.m. in the 1100 block of N. Cahuenga Boulevard.

It took 32 firefighters 18 minutes to extinguish the fire, which damaged at least three cars and spread to the apartment building above the carport.

Then, around 1:20 a.m., authorities received a call about a fire at 8021 Rothdell Trail in the Hollywood Hills, the former home of Jim Morrison.

The Doors frontman lived in the house with girlfriend Pamela Courson back in the 1960s. The house was famously the inspiration for the Morrison song "Love Street."

Fire crews arrived to find a Mazda Miata well-involved in flames, which spread to a balcony on the front of the house.

Fifty-six firefighters extinguished the blaze in about 35 minutes. They were able to contain it to the front portion of the three-story home.

One firefighter was injured in a fall from a ground ladder. He was taken to the hospital, where he was listed in stable condition.

The string of fires did not stop there. Yet another blaze broke out around 2:10 a.m. in the 1200 block of Harper Avenue in West Hollywood.

Another fire around 2:30 a.m. destroyed as many as four cars near a two-story apartment building in the 1800 block of N. Vine Street in Hollywood.

Finally, at about 4:10 a.m., firefighters were called to Poinsettia Place and Fountain Avenue in West Hollywood.

A fire was set in a carport between two apartment buildings there. Some residents were evacuated from nearby buildings, but no one was hurt.

Several other suspicious fires in the area are believed to have been started by the same person or persons.

"This is an arsonist working," LAFD Chief Mario Rueda said at a news conference Friday morning.

The fires followed just a day after authorities arrested 22-year-old Samuel Arrignton, of Sunland, and one other person in connection with three arsons that occurred in a five-block stretch of Sunset Blvd.

Authorities have not said if they believe Thursday's fires are connected to the rash of fires on Friday.

It was also not clear if they were looking for one or multiple suspects.