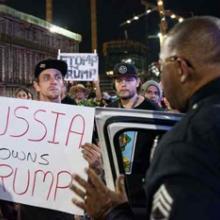 Los Angeles Police Department officers watch on as protesters march through downtown during a Anti-Donald Trump protest on Thursday, Nov. 10, 2016 in Los Angeles. Donald Trump has been elected as the next president of the United States. (Photo Correspondent Michael Ares)
Wes Woods
LA Daily News

Robert Harris, director of the LAPPL, criticized the LAPD's command staff Monday for what he called a "mismanagement" of resources and claimed understaffing of the department has been going on since the beginning of the year.

The LAPPL sent a letter Monday to Los Angeles City Controller Ron Galperin, requesting he "investigate" the number of officers deployed during the protests. A copy of the letter states "the Los Angeles Police Department lacked the baseline resources to effectively keep the public and police officers safe during these very well publicized protests. We are seeking your intervention to determine why officers were not held over or why officers were not called back to keep the peace during these protests."

The letter, sent by league president Craig D. Lally, says officers "were completely overwhelmed by the number of protestors (sic)" specifically mentioning a gathering on Wednesday, Nov. 9 where "only three LAPD motorcycle units were dispatched to prevent hundreds of protestors from swarming Highway 101."

Police arrested 28 people at the rally.

Since Tuesday's election, there have been daily protests in the city. The largest drew about 8,000 protesters on Saturday morning as they marched from MacArthur Park to downtown L.A.

That night, five people were arrested during a protest downtown, including four adults taken into custody for vandalism and one juvenile arrested for battery on an officer, police said.

Josh Rubenstein, the LAPD's public information director, said in a response statement that the protests have included demonstrations that have been organized and sometimes spontaneous and thus difficult to predict.

Rubenstein added that the department was taking a "proactive and forward-leaning approach to enable safe and lawful expressions of speech" while maintaining high levels of service displayed during Saturday's "large peaceful protests."

The LAPPL letter said a plainclothes LAPD officer was "viciously beaten" on Nov. 10 while trying to arrest a suspect vandalizing the Police Administration Building in downtown L.A.

It further alleged that "the LAPD only dispatched three plainclothes officers to provide security for the entire" building, adding that the officer who was attacked "was struck from behind and beaten with his handcuffs, and punched by a third attacker." The letter also states that "an additional officer was attacked and his firearm was stolen" during the Nov. 10 incident. The letter went on to question whether the police department would be prepared to handle major events such as "a terrorist attack or even hosting the Olympics."Advertisement

Rubenstein said the department has made every effort to maintain order during the protests.

"Last Wednesday, the spontaneous demonstration in downtown Los Angeles quickly grew and created safety hazards for the protestors and, in some cases, the need to take enforcement action against participants who refused to abide by the law," Rubenstein said. "The LAPD made every effort to re-deploy the resources necessary to protect the areas affected by the demonstrations and quickly adapt to the changing circumstances. The Department's quick action to redeploy resources coupled with proactive engagement with the protesters avoided substantial property damage and injuries."