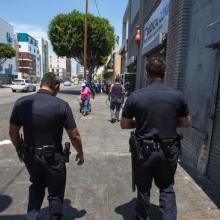 Los Angeles’ police union has thrown its support behind a national push for federal funding and other resources to help officers better prepare for interactions with people who are mentally ill.

The L.A. Police Protective League is one of more than a dozen police unions nationwide — including those in New York, San Jose and Chicago — calling on the federal government to pay for crisis-intervention training, less-lethal devices and officers who team up with mental health professionals to respond to emergency calls.

Their agenda, dubbed Compassionate and Accountable Responses for Everyone, was formally unveiled at a news conference Thursday morning in New York.

”Our national mental health crisis is a social problem, not a police problem,” said Jamie McBride, one of the LAPD union’s directors, on the steps of City Hall in Manhattan.

Teaching police how to appropriately respond to someone who has mental health issues is nothing new — agencies have offered such training for years. But those interactions have drawn renewed attention in recent years, particularly after several high-profile police shootings of people who were diagnosed with mental illnesses.

Mental health advocates and police said that officers are often first responders in situations involving people who could be better helped with treatment or other services. Officers frequently describe feeling pressured to act not just as a police officer, but also as a therapist or social worker when responding to such calls — a difficult task, they say, if the encounter is volatile.

“This is an issue that’s not going away. We have to deal with it,” McBride said in an interview. “Enough is enough.”

The coalition hopes that federal involvement will standardize mental health training for officers across the country and help departments create teams pairing police and mental health clinicians that respond to people who are in crisis. The unions are also calling to modify federal law that keeps certain medical information private, so that officers responding to a call would know if the subject had any prior mental health-related issues.

The unions have tied their effort to the case of a New York police sergeant charged with second-degree murder after fatally shooting a mentally ill woman who had a baseball bat, a case that one union leader from Oklahoma called a “political prosecution” at the news conference Thursday.

The ultimate goal, McBride said, is to ensure that police officers across the country have the appropriate tools in place.

“I think once anybody hears this, they’re going to look at this like this is a no-brainer,” McBride said of the overall agenda. “It’s something that’s needed. It’s not going to be the fix-all, but it’s going to be a step in the right direction.”

Louis Dekmar, the police chief in LaGrange, Ga., and first vice president of the International Assn. of Chiefs of Police, said the national policing group launched its own effort last year, trying to get agencies to pledge to craft policies and train officers to better handle situations involving mentally ill people. So far, he said, only 140 of about 18,000 agencies have signed on.

The challenge, he said, is a lack of resources.

“We’ve taken what should be a public health issue and we’ve turned it into a criminal issue,” he said. “And the sad commentary is, of the 900 and some fatal police shootings a year, about 25% are affected by mental illness.”

In Los Angeles, four of the 28 people struck by police gunfire in 2016 showed signs of mental illness, according to LAPD data. The previous year, nearly a third of the 38 people shot by police were perceived to be mentally ill.

LAPD officers receive 15 hours of training specific to mental health while in the academy, said Lt. Brian Bixler, who runs the department’s crisis response section. The department is in the process of providing 40 additional hours of training to officers — almost 1,350 have received it — with plans for an eight-hour refresher course at two-year intervals.

Training for police is key, said Laura Usher, a senior manager with the National Alliance on Mental Illness. Officers must recognize that people experiencing a mental health crisis may not respond to normal police commands, she said.

As a result, her organization partners with local agencies to teach strategies such as how to back away, lower your voice and build rapport with the person who needs help.

“There are cities and counties that are doing amazing work,” she said. “And then there are others that really have few resources and haven’t been able to take any steps.”