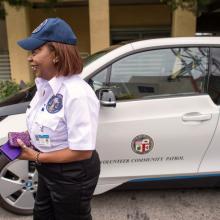 Mary L. Pennomon went from being a retired rabbinical secretary to patrolling the streets of her community Thursday as a volunteer with the Los Angeles Police Department.

She’s one of about two dozen volunteers who will drive around in marked vehicles largely in an effort to deter and report property crimes as part of the new West Valley Volunteer Community Patrol program. The West Valley Community Police Station in now the second station in the city to have the program after the Devonshire Division launched its pilot about four years ago.

“As a woman, how much cleaning can you do in the house? How much TV? So I decided to help the community,” Pennemon, who also serves on the Lake Balboa Neighborhood Council, explained before a news conference at the West Valley Community Police Station in Reseda.

“The police officers, they need help. We’re going to be their eyes and ears.”

The volunteers, who undergo a screening and background check, are not armed and do not have any enforcement authority. But they observe and report crime and quality-of-life issues to their station and distribute valuable information about crime trends to the community.

The program differs from the Volunteer Surveillance Teams that some San Fernando Valley police stations have had for years. The community patrol volunteers are in uniform and are meant to be visible as a deterrent to crime, while the VST members are in plain clothes and work covertly to report crime.

The West Valley community patrol volunteers range in age from a 21-year-old college student who aspires to be a police officer to an 80-year-old retired accountant, said LAPD Capt. Beverly Lewis, area commanding officer for the West Valley station.

They work in pairs in designated non-emergency vehicles that serve as a visible presence in areas hit hard with property crimes, including burglaries and car thefts, which make up the majority of crime in the San Fernando Valley area.

“We cannot handle the task of keeping this community safe alone,” Lewis said.

That sentiment was echoed by Los Angeles City Councilman Bob Blumenfield, who said despite city officials allocating significant dollars to the department, “it’s not enough to do the kind of patrol or have the visibility that we want.”

“So leveraging and having volunteers will make all the difference in the world,” he said.

Property crimes in the San Fernando Valley are down about 10 percent so far this year and about 8 percent in the West Valley area, according to LAPD Deputy Chief John Sherman.

Community patrol volunteers are also tasked with other “non-hazardous” duties, such as helping with missing person searches, which frees up police officers to handle radio calls and violent confrontations, Lewis said.

Both the Los Angeles County Sheriff’s Department and the Ventura County Sheriff’s Office have community patrol programs in place, LAPD Cmdr. Kris Pitcher said. The pilot program at the Devonshire station, which became permanent last year, was partly modeled after these programs.

LAPD Chief Charlie Beck’s goal is to expand the program to every geographic area of the city, he said.

Jason Sweener, another volunteer in the program, told reporters Thursday that he joined because he has seen the San Fernando Valley change over the years – and not always for the better.

“I don’t want to just be the one to pick up the phone and complaint about something,” he said.

“I want to be able to do something about it.”