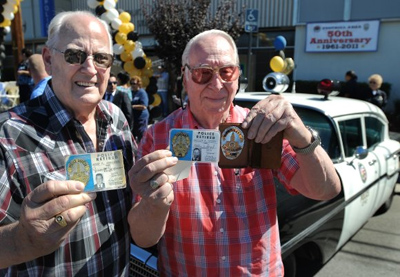 Retired police officers Jery Jorgensen, 74, left, and Phillip Siegel, 84, who worked in the Foothill Division celebrate its 50th anniversary at an open house at the station in Pacoima on Saturday, Oct. 8, 2011. The event included tours and entertainment that included folklorico dancing and a live rock band. Pacoima, CA. (John McCoy/Daily News Staff Photographer)

Things were a lot different when LAPD opened its Foothill Division headquarters in Pacoima in 1961.

The northeast San Fernando Valley was in the midst of a transformation from citrus and olive groves to a bedroom community. The new neighborhoods were home to 217,000 people, about 40 percent of them belonging to the generation known as baby boomers.

Policemen -- there were few women on the force -- sweltered in long-sleeved woolen uniforms as they drove un-air-conditioned Ford or Chevrolet cruisers through the streets of Granada Hills, Sylmar, Pacoima, Sun Valley, Sunland and Tujunga.

Being a cop was a lot easier back then, retired Officer Jerry Jorgensen said Saturday, as he reminisced during the 50th anniversary celebration of Foothill Division.

"There was no drugs on the street in our days," said Jorgensen, who joined the force in 1959 and retired 31 years later. "Now, you might stop someone with a truck full of cocaine."

"People in those days submitted to arrest," said Siegel, who retired in 1970. "You say, 'You're under arrest,' put handcuffs on them, they went. They didn't challenge to you to fight, they didn't try to pull a gun or a knife on you."

The two were among roughly 100 people at Foothill's golden anniversary celebration, which featured food, entertainment and tours of the newly refurbished station.

Open since Sept. 1, 1961, and one of the LAPD's oldest stations, Foothill has new paint, tile, furniture and landscaping, thanks to the work of local volunteers.

"So many of the police stations have gotten new facilities," said Capt. Joseph Hiltner. "The fact that we've been able to fix the place up with such involvement from the community is really a testament to what a great partnership we have with the community."

In 1991, the Pacoima station became the center of unwanted attention when officers assigned to Foothill were videotaped beating African-American motorist Rodney King. Their acquittal of criminal charges sparked the deadly Los Angeles Riots in 1992.

A blue-ribbon commission recommended scores of reforms that transformed the culture of the Los Angeles Police Department.

"But reforms were massive and across the board. It was literally a paradigm shift for the department because we abandoned one policing philosophy for another that has proven to be far more user-friendly and more successful."

Foothill also weathered the floods of 1978, and the destructive magnitude-6.6 Sylmar Earthquake of 1971.

"It was chaos," said Jorgensen, who was designated the senior lead officer during the disaster.

Freeways had collapsed, including the overpass connecting the Golden State (5) and Foothill (210) freeways that fell, killing at least two.

Despite everything that the community has been through, one thing has remained constant, officials said.

"The one thing that hasn't changed is the commitment the men and women of the Police Department have in keeping all of us safe," said Councilman Paul Krekorian. "And the relationship that this division has with this community.

"This community has had a close link with this police division throughout those 50 years."