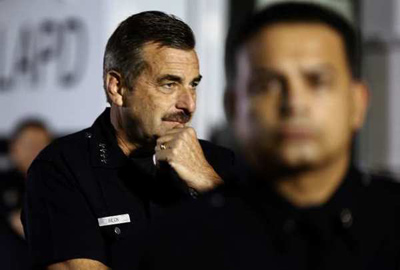 At first glance, a proposal by LAPD Chief Charlie Beck to clarify the way police handle cars they impound from unlicensed drivers doesn't sound controversial. But his proposal touches one of the city's hot-button issues - illegal immigration - and it reopens a larger, historical question: Who's in charge of the city's police?

Under Beck's plan, police officers would be given guidelines for when they should impound the cars of unlicensed drivers for 30 days - a penalty that can impede a driver's ability to work and cost him or her almost $1,400 - and when they should instead merely hold a car until a licensed driver can pick it up. Factors such as the driver's record and the seriousness of the violation would dictate which approach would be employed and presumably discourage arbitrary and unequal treatment. His approach would conform to state law and court decisions and, as he told me last week, ensure that LAPD practice reinforced its broader policies regarding the fair treatment of those it cites or arrests.

None of that has anything directly to do with illegal immigration; the rules would apply to anyone driving without a license for whatever reason. But because so many unlicensed drivers in Los Angeles are immigrants in the country illegally and therefore unable to secure a driver's license, this proposed change in policy would have special ramifications for the city's immigrant community. As a result, immigrant groups have cheered it, while law-and-order types have bitterly opposed it. At a recent San Fernando Valley meeting, hundreds of critics turned out to denounce the proposal.

Beck's approach strikes me as humane and sensible. What's problematic is whether this really is his call to make. After the videotaped beating of Rodney G. King incensed the public in 1991, city leaders recognized the importance of reasserting civilian control over the department. The mechanism, forged by the Christopher Commission and codified by voters, was to give greater power to the city's civilian Police Commission. Today, the chief has authority to run the department - he hires, fires, disciplines and deploys the force - while the commission sets broad policy, effectively acting as a board of trustees.

What Beck is proposing is a matter of intense public interest; it would significantly affect the actions of police officers; and debate over it has polarized the city partly along racial lines. It's hard to imagine a matter more squarely in the area of policy. Moreover, the LAPD already regards this area as a policy matter. Take this 2010 report by the commission's inspector general: "We noted some confusion among officers, supervisors and adjudicators regarding the current department policy on impounding vehicles of unlicensed drivers." Note the specific use of the word "policy."

Richard Drooyan is the president of the Police Commission and a veteran of the police reform debate in Los Angeles, having served as a lawyer to the Christopher Commission and been a leading advocate for the improvement of city and county policing. In this case, he says, the jurisdictional issue is a close call. "The argument for us to do something is that this is a matter of intense interest to the community and we're the eyes and ears of the community," he told me last week. And the argument against? "We don't want to micromanage the chief."

Drooyan is an exceptionally capable commission president. But the trouble with the balancing act he's attempting is that it invites critics to conclude that the commission is ducking the question. Jack Dunphy, the pseudonymous officer who often writes about the LAPD, complained that the commission is hoping to let Beck carry the load to shield itself, the mayor and the City Council from public outcry. "Clearly it was the hope of all involved that the change would shimmer into permanence while escaping public scrutiny," he wrote recently. I don't often agree with Dunphy, but this time he's got a point.

It's easy to see why supporters of this change in policy would prefer for Beck to implement it himself. It's tempting but wrong. The authority of the commission was hard won over many years. It shouldn't be squandered now, even if the chief would handle that responsibility with care.