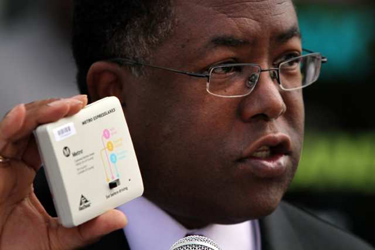 The 11-mile toll lane, which was created using existing carpool lanes, runs between the Harbor Gateway Transit Center/182nd Street and Adams Boulevard and aims to provide a faster trip for motorists who are willing to pay a small price.

Tolls will vary between 25 cents and $1.40 per mile, depending on traffic speeds and demand, and solo drivers and carpoolers will need a transponder and FasTrak account if they want to use the lanes.

The transponders have three settings: One for solo drivers, one for those with two people in the car, and one for three or more. Carpoolers will not have to pay the toll, but they would still need to have a transponder in the vehicle.

Officials are also working on another 14-mile stretch of toll lanes on the 10 Freeway, between Union Station/Alameda Street and the 605 Freeway. Those lanes are expected to open early next year.

Visit www.metroexpresslanes.net for more information and for instructions on how to open an account and get an ExpressLanes transponder.