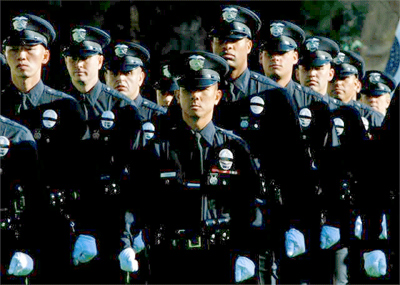 As families gather across Los Angeles and beyond, many will celebrate the holiday weekend with a joy they owe in part to this city's historic triumph against crime. In the early 1990s, Los Angeles typically was the scene of more than 1,000 murders a year, a shocking toll that sapped the city's self-confidence as it cut a devastating swath through neighborhoods, schools and, most tragically, families. It has become easy in recent years to expect crime to decline here, but it's worth remembering how dangerous this city was compared with how safe it is.

As of mid-November this year, 254 men and women have been murdered in Los Angeles during 2011. That's still a shocking number, but it means that some 800 families will enjoy this holiday without the shadow of murder. And that's true year after year; those 800 families are merely those who escaped a tragedy in the last 12 months. Hundreds more would have suffered a loss in the previous year or years before, so the relief is as compounding as the tragedy once was.

That sea change in violence and its ramifications is part of a national trend, though the effects in Los Angeles have been particularly dramatic. Across the nation, the homicide rate - the number of people killed per 100,000 population - increased from about four per 100,000 in the 1950s to about 10 in the early 1990s; since then, it has dropped to about 5.5. The decline in Los Angeles has been far greater: In 1993, the homicide rate was 30.5 per 100,000; this year, it's on track to end at about six. As city leaders like to note, not since Eisenhower was president has Los Angeles been this safe.

The reasons for this change have been widely studied, though not to a complete consensus. Social scientists have pointed to changing demographics - the aging of a youthful population that accounts for most violent crime - the waning popularity of crack, rising prison populations, gun control laws, even the legalization of abortion. The theory regarding abortion argues that unwanted children are disproportionately inclined to commit crimes, so limiting the number of such children also has had the effect of reducing crime. One provocative statistic: The decline in crime in high-propensity abortion states from 1985 to 1997 was 25.9%, while in low-propensity abortion states over the same period, crime increased 4.1%.

But two factors have commanded the most attention: the increased number of police officers, again nationally as well as in Los Angeles, and the adoption of new policing strategies, usually under the general definition of "community policing." Both have been at work in Los Angeles for most of that period, and offer a persuasive rebuttal to social scientists who once doubted whether police had much to do with crime. Driven by improved statistical analysis and refined responses to crime trends - as well as renewed commitment to respect for constitutional rights - police are registering significant gains in systematically combating crime. Long and gratefully past are the days when chiefs such as Los Angeles' Daryl F. Gates could argue that smaller, aggressive forces were in the public interest. Gates' approach led to increased crime and public revulsion at police practices; the opposite has bolstered confidence in police and driven down crime. The impact of modern policing, both in numbers and in approach, is validated by the work of the LAPD in recent decades, as it is in New York and elsewhere. Today, few criminologists argue that police are irrelevant.

There is, in addition, a growing body of literature on the effects of this historic decline in crime, especially murder. For every crime there is a cost - property that is lost, medical bills to pay, work days missed and the more difficult-to-measure effects of psychological damage to survivors. One study by researchers at Iowa State University in 2010 concluded that the societal cost of a single murder - including the cost to victims, to the criminal justice system and to the lost productivity of offenders, as well as a complicated measure known as the "willingness to pay" to prevent murder - exceeds $17 million. By that calculation, the savings to Los Angeles of eliminating 800 murders a year since the early 1990s comes to more than $1.36 billion annually. As those researchers noted "In addition to the lives that are lost and shattered, murder also denotes extraordinary collateral fiscal costs."

No family that has lost a relative to murder ever entirely recovers. The empty seat at Thanksgiving may be occupied, but the hole left by an absent son or daughter, a missing mother or father, never again is filled to the brim. This weekend in Los Angeles, 800 families enjoy a holiday that would have been barren by comparison had they lost a loved one this year to a murder. That is a social victory for which every resident of this city should be appreciative.