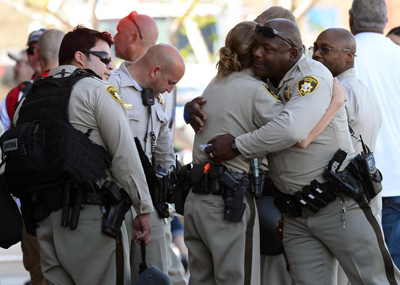 Grieving police officers hug near a Walmart after assailants killed two of their own as a pizza restaurant on Sunday morning. (Ethan Miller/Getty Images)

Two Las Vegas police officers and a civilian were killed after two shooters went on a rampage Sunday afternoon before killing themselves inside a busy Walmart.

The two shooters, a man and woman, stormed into CiCi's Pizza at around 11:20 a.m. and confronted two uniformed officers with Las Vegas Metropolitan Police Department eating pizza on a break and gunned them down.

Sheriff Douglas Gillespie asked for patience during the investigation because both of the officers were "family men" and "they're leaving behind loved ones."

The shooters are thought to be a married couple in their late 20s who were new to the Las Vegas Valley, according to the Las Vegas Review-Journal. Police are reportedly investigating links to the white supremacy movement, having found swastika symbols during their initial investigation.

One of them shouted, "This is the start of a revolution," before killing one of the officers execution style as they refilled a soda, reports the Review-Journal.

The officers were identified as Officers Alyn Beck, 42, and Igor Soldo, 32.

The second officer was shot several times by the female shooter, but he returned fire, Gillespie said at a press conference. The officer later died at a local hospital while in surgery. Their bodies were escorted by a police motorcade to the coroner's office.

The killers stripped the officers' of their weapons and ammunition, before covering the officers with something that featured the Gadsden flag, a yellow banner with a coiled snake above the words, "Don't tread on Me," according to the Review-Journal. 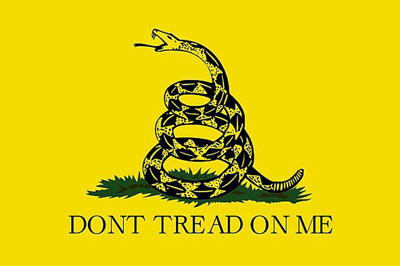 The shooters reportedly covered the officers' bodies with something featuring the Gadsden flag.

This flag was draped over the dead officer's body: Known as the Gadsden Flag, this symbol of defiance dating back to the American Revolutionary War was used to cover the slain officer.

The flag was designed by Christopher Gadsden, a Revolutionary War general and statesman, in 1775. It was adopted as the symbol of the Tea Party Movement in 2009.

They shamelessly told a witness outside the restaurant they just killed two cops and crossed the parking lot toward Walmart to continue their path of destruction.

Witnesses could hear the suspects coming as they shouted "bad words" walking up to Walmart and yelled at everyone to get out of the store.

The shooters killed another victim who may have pulled out a concealed weapon and exchanged fire, the newspaper reported.

A grandmother shopping in the makeup aisle with her two teenage granddaughters told the paper she dropped to the floor and prayed when they heard several shots fired in the store.

The family snuck out of the store when they could no longer see the shooters.

Shoppers saw police swarm the area as they dashed to safety. 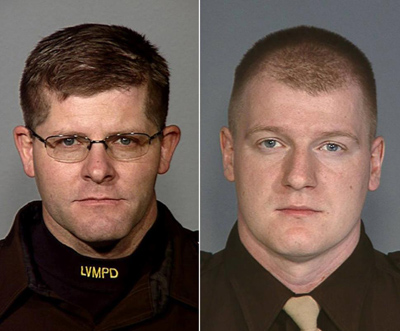 Officer Alyn Beck, 41, and Officer Igor Soldo, 31, were killed today while having lunch at CiCi's Pizza in Las Vegas. (LVMPD )

A motorcycle cop ditched his bike in a hurry to get inside, Jesus Bustamante, 27, told the Los Angeles Times, but another officer ran right back out to tell people to get away.

They found the unidentified civilian dead in the front door.

"If you know the cops are scared, then you know it's dangerous," Bustamante said.

There was gunfire between the officers and suspects, Gillespie said, but the couple retreated to the back of the store.

The female shooter shot her male companion and took her own life in a suicide pact.

The police department sent text alerts to its officers to shroud their badges in honor of their fallen colleagues and to volunteer for shifts so no officer would ride solo during patrol. 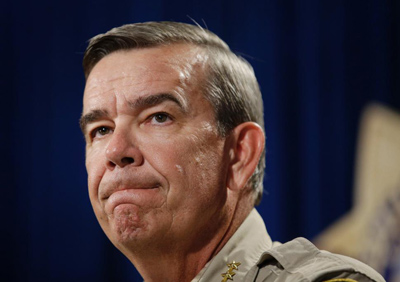 'Two of my officers were killed in the life of duty,' said Sheriff Douglas Gillespie at a press conference Sunday evening. He identified the fallen officers as Alyn Beck and Igor Soldo. (John Locher/AP)

It's not clear what led to the killing spree, but Gillespie's officers were "simply having lunch," he said.

The identity of the shooters will be released by the Clark County coroner's office following an autopsy.

One of the shooters has been described as a tall, white male.

A bomb squad was called to the scene to investigate the contents of the bags, the Review-Journal reported.

An unnamed Metro officer described their department as lucky because they have had so few officers killed in the agency's history.

"In a town like this, with the criminals and scumbags we're dealing with every day, you're always wondering when something is going to happen," the officer told the paper.

There have been 20 officers with the agency killed on-duty, including the death of Beck and Soldo. They join 19 other police officers killed in the line of duty by gunfire across the nation.