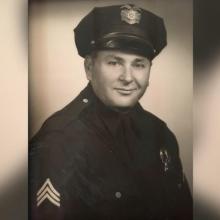 Relatives celebrated his historic connection to LAPD lore and his big heart toward his extended family.

"He was very much involved with his family," said his daughter-in-law Michelle Giacopuzzi. "He really was pretty much devoted to them."

Lindo Giacopuzzi served on the legendary task force that tackled widespread organized crime in the city during the 1940s and 1950s. While there, he helped take down notorious gangsters such as Bugsy Siegel and Boyle Heights native Mickey Cohen.

Giacopuzzi became a valuable recruit to the Gangster Squad because of his physical strength and ability to speak Italian, the language commonly used by mobsters, according to the LAPD.

Later, Giacopuzzi would tell stories of how he and his fellow Gangster Squad members would meet out-of-town mobsters at Union Station and "have a little talk" with them in the basement of Parker Center before sending them on a train back home, his son John recalled.

Giacopuzzi grew up on his family's dairy farm before his father eventually sold it to Joe Albertson, founder of Albertson's supermarket chain. He credited his considerable strength to the hard work he did at the dairy growing up. A plaque commemorating the Giacopuzzi dairy site remains at 19755 Vanowen St. in Winnetka where a shopping center now stands.

Giacopuzzi retired in the mid-1960s but stayed active. He liked to read, golf, bowl, and even trained thoroughbred horses, said his daughter-in-law Michelle Giacopuzzi.

Giacopuzzi was interviewed extensively for Paul Liberman's 2012 book "Gangster Squad" but did not like the 2013 movie adaptation that starred Ryan Reynolds.

"Too much violence," Michelle said.

He also took offense to how powerful and brutal Cohen was portrayed in the film. Giacopuzzi said the gang boss, who called the officer by his nickname "Jacko," only ran illegal gambling joints.

Even decades into retirement, Giacopuzzi never strayed far from his LAPD roots. The then-99-year-old tipped off the department's West Valley Community station about a "prolific car thief" in 2015, said Capt. Paul Vernon.

Vernon was ecstatic when he discovered the tipster's history with the LAPD.

"I felt like Huell Howser finding the Lingbergh Light in a basement," Vernon said in a 2016 news release. "I realized we had a historic treasure living in our division."

Vernon organized a 100th birthday party for Giacopuzzi at the West Valley station in April 2016.

"I wanted the officers to meet this man, and I thought it would be nice for him to be remembered by some 21st century officers," Vernon said.