Skip to main content
13
Oct 2016
Law enforcement officers gather at memorial for slain L.A. County sheriff's sergeant: 'He was the best of us'

They arrived in shades of blue, green, tan - with proud shoulders and weary faces. Many knew well the man whose body lay in the black hearse escorted into a Lancaster church parking lot. 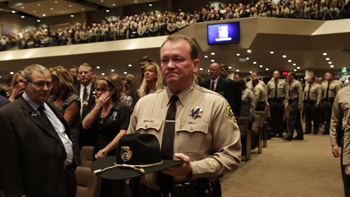 Still, they had traveled from as far as Chicago and New York to pay tribute to a brother gunned down in what the sheriff of Los Angeles County had called a "calculated execution."

Some wore black bands across their sheriff's badges emblazoned with six digits: 258449.

It was the badge number Sgt. Steve Owen had worn during a nearly three-decade career with the Sheriff's Department - before his life was stolen by five gunshots during a routine burglary call.

Thousands of law enforcement officials and members of the community gather to pay their respects to slain Los Angeles County Sheriff's Sgt. Steve Owen at Lancaster Baptist Church in Lancaster.

"He wasn't just one of us. He was the best of us," Deputy Greg Whalen of the Lancaster sheriff's station, Owen's home base for most of his career, said Thursday. "He was the guy we all wanted to be."

The 53-year-old's memorial service at Lancaster Baptist Church, although closed to the general public, drew thousands on Thursday, with many watching the services on monitors in overflow tents.

Shortly after 10:30 a.m., Owen's casket, draped with an American flag, emerged from the hearse. Eight pallbearers, each in a black suit, gathered to flank its sides.

Led by a bagpiper whose tasseled cap swayed in the breeze, the casket slowly moved down a path formed by rows of sheriff's deputies, their hands raised in a crisp salute.

Inside the packed church, the crowd hushed. Handkerchiefs appeared. Tears were wiped.

From the pulpit, Pastor Paul Chappell addressed the room.

"Steve was a man's man, he was a cop's cop, he knew his tactics, he was a great investigator and a great leader who influenced the lives of many in this community and throughout this region," he said.

Sometimes, mothers who had witnessed Owen arresting their sons would thank him afterward for the respectful way he worked. 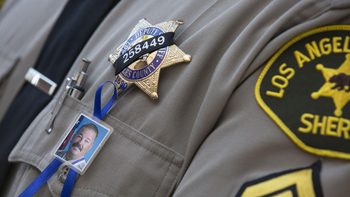 Owen had been tough, but gentle. He pushed you to want to work harder. Owen was a skilled waterskiier, an avid camper. He had an appetite - you had to watch your food around Owen. His deep voice earned him the nickname "Bullfrog." He had been an equestrian and a gardener, planting plum trees and peppers. He loved lemon bars and salsa.

The long line of speakers who solemnly strode up the stage steps did their best to smile and joke even as their faces crumpled and voices faltered.

Owen had been tough, but gentle. He pushed you to want to work harder. Owen was a skilled waterskiier, an avid camper. He had an appetite - you had to watch your food around Owen. His deep voice earned him the nickname "Bullfrog." He had been an equestrian and a gardener, planting plum trees and peppers. He loved lemon bars and salsa.

"He made me feel like the most special girl in the room," Owen's wife, Tania, wrote in a eulogy that was read aloud by a family member.

"On our days off, he would make me coffee, and on Sundays he would bring me breakfast in bed, and we would sit together and he would read the Bible to me. ... Trying to describe the love I felt for Steve is like trying to count the stars. It would be endless, and I would always be trying to find more."

A large man with soft blue eyes and a memorable grin, Owen spent hours of his spare time coaching football and volunteering in the area. He chose to patrol the streets of his Antelope Valley community rather than take a desk job.

"He would always say it was about protecting people, protecting the community, taking the bad man to jail," said Det. Mark Donnel, who also works at the Lancaster station.

Among the throng of law enforcement officers who had gathered earlier in the day to escort Owen's body from the station to the church was Officer Michael Weiss of the New York Police Department. Weiss, whose hat and shirt were decorated with plaques bearing Owen's 258449, shook hands with sheriff's deputies, telling them he was sorry for their loss.

Officer George Kuzmanovski of the Chicago Police Department said he had arrived to show support for the slain sergeant's family as well as the Sheriff's Department.

"We know what it's like to lose a good officer. It doesn't matter where it happens," he said.

In the station's parking lot, the blue uniforms of peace officers from other California agencies - Anaheim, Santa Ana, Long Beach, San Gabriel, Richmond, Chino, Glendale, Burbank, Los Angeles - stood out against the L.A. County deputies' tan and green. Cops mingled and caught up with friends, and those who knew Owen shared stories about him. Some had Owen's photo pinned to their shirts. 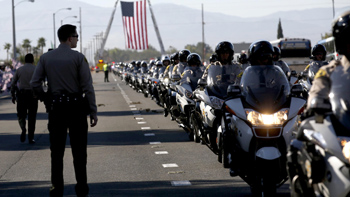 Standing in front of a memorial of balloons, candles and handwritten tributes at the Lancaster station, L.A. County Sheriff Jim McDonnell said anti-police sentiment was at a high point.

Owen, a medal of valor recipient, was the first L.A. County sheriff's deputy shot and killed in the line of duty in more than a decade.

Three days after Owen was killed, two Palm Springs police officers were slain in an ambush. Memorial services for Jose "Gil" Vega and Lesley Zerebny will be 11 a.m. Tuesday at the Palm Springs Convention Center.

"I hope this is a wake-up call to reconsider where we've been and chart a new path forward," he said.

The outpouring of goodwill from the community after Owen's shooting, he said, shows that the majority of the public supports police.

Three days after Owen was killed, two Palm Springs police officers were slain in an ambush. Memorial services for Jose "Gil" Vega and Lesley Zerebny will be 11 a.m. Tuesday at the Palm Springs Convention Center.

In Lancaster, a Sheriff's Department spokeswoman said more than 60 law enforcement agencies had planned to send representatives to Owen's service on Thursday.

The Sheriff's Department streamed the memorial live on its website.

Owen was gunned down Oct. 5 as he responded to a burglary call near an apartment complex in the 3200 block of West Avenue J-7. The gunman wounded Owen, then stood over him and shot him four times, according to McDonnell.

Trenton Lovell, 27, has been charged with murder and other crimes in connection with the killing.

On Thursday, Owen's mother addressed attendees of the memorial service, calling the community's response to her son's death "phenomenal."

"Why we are experiencing this, I'll never know, but believe me, we have been touched," she said.

In a unique homage to the sergeant whom she had often reprimanded for chewing gum while on TV, Mildred Owen then popped a piece of gum into her mouth.

Owen's brother implored those listening to take the time to draw their loved ones close. Don't let my brother die in vain, he pleaded.

"What would I give for one more minute," an emotional David Owen said.

When the three-hour service ended, the room fell silent and the bagpiper began again.